Peter Hart‘s lede reporting on his latest poll for WSJ/NBC News is a gem:

The hot air remains, but the balloon is no longer aloft. New Jersey Gov. Chris Christie, one of several Republicans aspiring to be the 45th U.S. president, has been dealt a harsh verdict by his party’s electorate: He is no longer a viable candidate.

Presented with a list of 14 possible candidates for the 2016 GOP presidential nomination, Republican primary voters placed Mr. Christie next to last. Fully 57% of Wall Street Journal/NBC News poll respondents say they can’t support him. Only Donald Trump (at 74%) has united more Republicans in a negative way.

The thumbs-down signal comes from a majority of every segment of the GOP electorate, but it crests with men at 62%, very conservative Republicans at 69%, and tea-party backers at 72%. Even within the moderate wing of the GOP, 57% just say no. For the record, the top three positive results went to Marco Rubio, Scott Walker, and Mike Huckabee.

The accompanying graphic is less amusing but quite interesting: 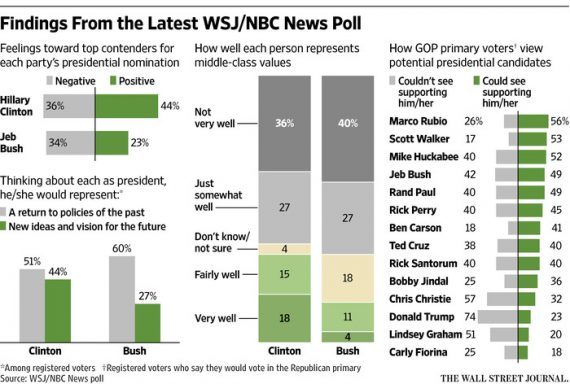 It’s worth noting that, in answer to my question yesterday as to why Hillary Clinton is running away with the race for the Democratic nomination, “86% of likely Democratic primary voters say they are open to supporting Mrs. Clinton for the party’s nomination, and 13% said they couldn’t.” While somewhat skewed by name recognition, that’s a staggering difference from any of the Republican possibles.

Back to the GOP side:

The two Republicans who begin the race on the strongest footing in the poll are Florida Sen. Marco Rubio and Wisconsin Gov. Scott Walker. More than half of GOP primary voters said they were open to supporting Messrs. Rubio or Walker, compared with 49% who said so of Mr. Bush.

Resistance within the party to Messrs. Rubio and Walker is far lower than for Mr. Bush: Some 26% said they couldn’t see themselves supporting Mr. Rubio, and 17% said so of the Wisconsin governor.

The good news for Mr. Bush is that he has nearly a year to reshape his image before voting begins, and none of his likely rivals shows signs of running away with the race.

In fact, he would begin the 2016 campaign in much the same place that former Massachusetts Gov. Mitt Romney began the 2012 race in which he locked up the nomination after a long primary slog. Mr. Romney was viewed positively by 43% of GOP primary voters and negatively by 12% about a year before primary voting began, about the same as Mr. Bush is viewed among GOP primary voters today.

“He still has room to change his image,” Fred Yang, the Democratic pollster who conducted the survey with Republican Bill McInturff, said of Mr. Bush. He noted that 43% of the public is still on the fence about Mr. Bush or doesn’t know him well enough to form an opinion.

Messrs. Rubio and Walker are the two most acceptable candidates across different segments of the GOP, including very conservative voters and those moderate-to-liberal Republicans who say they would vote in a GOP primary. Of the two, Mr. Walker remains more of an unknown; more than half the country—including a quarter of Republican primary voters—said they didn’t know enough about him to form an opinion.

“We should be cautious about how unformed this race is,” said Mr. McInturff.

That’s of course the peril of political punditry. What we can say about the race at this point is interesting but based on too little information to be of much use. Once there’s enough information to make meaningful commentary, it’s generally no longer all that interesting.

While I wouldn’t have said so six months ago given my own strong dislike of Clinton, it now appears that she’s going to simply walk to the nomination all but unopposed. I see Rubio, Walker, and Bush as the only viable Republicans in the field and think Bush by far the most similar to those who have won the nomination in the past. I don’t see how anyone else even gets seriously into the conversation.