Earlier this month, the City of Houston found itself in hot water and under criticism from a wide range of legal scholars over subpoenas that had been issued by its attorneys in a lawsuit concerning a signature drive for a referendum to overturn a law banning discrimination against gays, lesbians, and transgender people that was led by a coalition of Pastors in the city. Those subpoenas asked the Pastors for a wide range of correspondence, memoranda, and copies of sermons that covered not just the signature drive but also anything on the issue of homosexuality of gay rights. The Pastors objected, and while many on the right called the subpoenas an attack on the First Amendment, their real problem was, as I pointed out, the fact that they were quite clearly overly broad and not within the bounds of acceptable discovery under the rules governing Civil Procedure in Federal Court. Several days after the controversy broke, the City Attorney, who claimed he had not been directly involved in drafting the subpoenas, said he would ask the attorneys to scale back the scope of the requests. Now, Houston’s Mayor has announced that the subpoenas would be withdrawn in toto:

Convinced by clergymen from across the country that she had entered a raging national debate on religious freedom she wanted no part of, Mayor Annise Parker on Wednesday agreed to withdraw controversial subpoenas the city issued to five local pastors in connection with a lawsuit over Houston’s equal rights ordinance.

The mayor’s announcement came amid an unabated firestorm over the subpoenas, particularly among Christian conservatives and Republican politicians, who blasted Parker for trying to “silence the church.”

Parker’s decision represented the only viable political option, said University of Virginia law professorDouglas Laycock, a specialist in religious liberty law. Seeking so much material was inflammatory, he said, adding that much of what the city seeks can be obtained by other means.

“There was so little that seemed relevant and legitimate,” he said, “they were better to just completely withdraw them.”

Southern Methodist University political scientistMatthew Wilson said the mayor was bound to take flak locally for disqualifying a petition that sought to force a referendum on the ordinance, triggering the lawsuit. However, the subpoenas engaged a vocal group of national foes.

“The city can stop some of the bleeding,” he said. “But much of the damage is already done.”

Parker two weeks ago had left the subpoenas in place with any mention of “sermons” removed. However, the mayor said calm, respectful meetings on Tuesday with local and national pastors persuaded her to drop the requests for documents altogether.

The move is in the best interest of Houston, she said, and is not an admission that the requests were in any way illegal or intruded on religious liberties.

“I didn’t do this to satisfy them,” Parker said of critics. “I did it because it was not serving Houston.”

Parker said she was persuaded, in part, by the demeanor of the clergymen she met with Tuesday, saying they were concerned not about the ordinance or politics but about the subpoenas’ impact on the ongoing national discussion of religious freedoms.

“That was the most persuasive argument, because to me it was, ‘What is the goal of the subpoenas?’ The goal of the subpoenas is to defend against a lawsuit and not to provoke a public debate,” Parker said. “I don’t want to have a national debate about freedom of religion when my whole purpose is to defend a strong and wonderful and appropriate city ordinance against local attack.”

Among the seven pastors who flew to Houston to meet with Parker was the Rev. Myke Crowder, of Christian Life Church in Layton, Utah. He described the meeting as “honest, respectful and serious,” and said it focused not on politics but on the theological implication of the subpoenas. While the group left the meeting unsure whether Parker would pull the subpoenas, Crowder said they were confident she was taking it under consideration.

“What we did was to simply, respectfully articulate our concerns,” Crowder said. “And I believe what we did was help her to understand a broader picture than what she might have seen before. She honestly listened, she asked hard questions, fair questions, and we gave her fair and honest answers.”

While the City might well have been able to defend narrower subpoenas in a hearing, this seems to be a prudent move on the part of the Mayor’s office both politically and tactically. Politically, it was clear that the initial reaction to the overly broad subpoenas was working against the city’s position and providing ammunition to the Mayor’s opponents on this issue. From the point of view of legal tactics, the fact that most of the information that was being requested that would have likely been considered acceptable by a Federal Judge is apparently available by other means would seem to make the subpoenas unnecessary and may have led the Judge hearing the case to toss the subpoenas completely. The lawsuit, meanwhile, which concerns the validity of signatures submitted to get a referendum overturning the anti-discrimination ordinance on the ballot, will go forward. 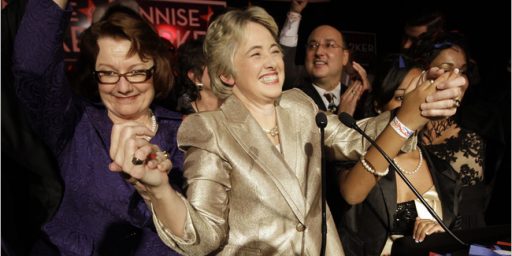