When we think of opposition to free trade, domestic interests like farmers and unions often spring to mind. As Jagdish Bhagwati notes, however, Oxfam, Action Aid, and other international charities have emerged and “unfortunately signed on to several fallacies about trade that do serious harm to the cause of the poor nations.”

The Truth About Trade (Wall Street Journal via CFR)

[Charities] regularly allege that poor countries suffer from systematic rich-country “hypocrisy” leading to “double standards” in trade policy, with rich countries having more trade barriers than poor ones. The facts, however, are exactly the opposite for the most part. There is greater tariff protection on manufactures in the poor countries: This has followed from the fact that the poor countries, not the rich ones, have long been given special and differential treatment in trade negotiations.

The charities also say that, while rich-country trade liberalization is good for the poor countries, poor-country trade liberalization is bad for them. What is sauce for the rich goose is not sauce for the poor gander. In this fallacy, they are arguing against a mass of empirical evidence which shows that infant industry protection is often counterproductive and costly. Moreover, what postwar trade analyses show, and what the charities do not understand, is that autarkic trade barriers make domestic markets more lucrative than exports, leading therefore to an incentive bias against exports. So even when the rich-country markets are opened further, one’s own trade barriers can prevent the penetration of these markets.

Bhagwati makes other good points, including the complexities of agricultural-subsidy removals. But I want to elaborate on his argument about the effects of poor-country trade liberalization, since the empirical evidence is, as he writes, pretty considerable.

Below is a table that I’ve put together based on data from Kym Anderson et al’s “The Cost of Rich (and Poor) Country Protection to Developing Countries.” It shows the economic benefits that high-income and low-income countries reap under three different liberalization scenarios: 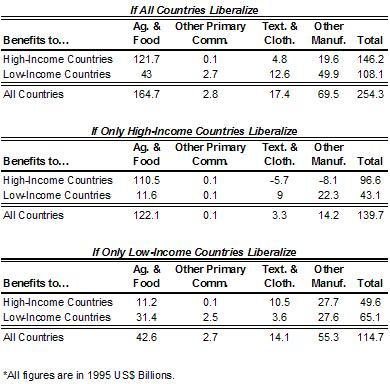 Bottom line: in raising skepticism about freer trade, NGOs do the poor a significant disservice.

Rall: Charities are for Suckers

Why Free Trade Is Significant