Amazon is making the complete "I Love Lucy" television series -- a whopping 5394 minutes of entertainment on 34 discs -- available for one day only at $84.99. 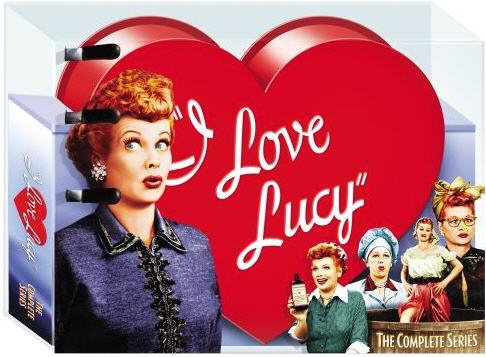 Glenn Reynolds alerts me that Amazon is making the complete “I Love Lucy” television series — a whopping 5394 minutes of entertainment on 34 discs — available for one day only at $84.99. That’s remarkably inexpensive.

Still, considering that I’ve seen most of these episodes and believe that DVDs will soon be rendered obsolete — if they haven’t been already — by instant downloading, I’ll pass.

He teases the announcement with “UNLIKE ANDY GRIFFITH, NOT RUINED BY POLITICS.”  He’d recently promo’d a similar Amazon offering for the iconic 1960s sitcom and get reader complaints that they could no longer watch the show because of actor Andy Griffith’s recent commercial touting ObamaCare and the virtues of socialized medicine.

Are there really people out there who can’t enjoy an actor’s work because he’s a member of the opposite political party? I could understand no longer being able to watch OJ Simpson in the “Naked Gun” movies or Woody Allen in anything given their personal lives.  But Griffith’s endorsement of a mainstream public policy issue that I happen to disagree with doesn’t fall into that camp any more than his pimping Ritz crackers.