While the displacement of poor blacks from their neighborhoods by affluent whites may be lamentable, it's better than the alternatives. 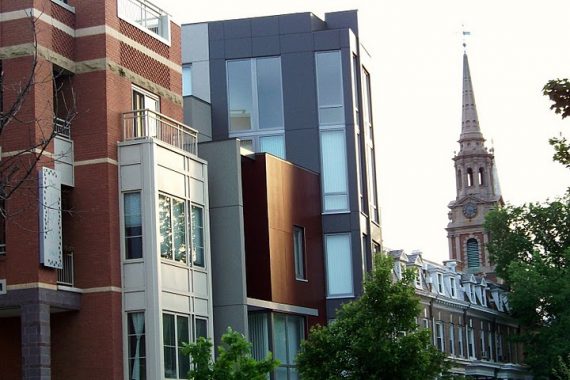 Megan McArdle is feeling a bit sheepish about having closed on a house in a neighborhood “where poor black residents who have lived there for a generation or more exist somewhat uncomfortably side-by-side with more affluent whites who are drawn to the relatively cheap rents and lovely Victorian housing stock.”

She’d like it to remain a “mixed” neighborhood, in terms of both race and class, but laments the fact that it’s unlikely to happen.  Either the place will soon be overrun with McSudelmans* and their ilk or gentrification will fail and the affluent whites will migrate elsewhere in search of affordable architecture, atmosphere, and smoothies.

Megan cites and excerpts her colleague Benjamin Schwarz‘ “Gentrification and Its Discontents,” which is aptly subtitled “Manhattan never was what we think it was.”  The essence of the piece are in these two paragraphs:

Neither writer seems to apprehend the inherently impermanent nature of this balance, because neither writer comprehends large-scale economic processes. For instance, in railing against the passing of SoHo’s exhilarating, creative days—characterized by “the mix of artists, crafts-people, small manufacturers, researchers [!], as well as of commerce oriented to their needs” (a few funky bars for the artists; places like the collectively run restaurant Food)—Sorkin joins in the lamentation for “the rapid decline of the city’s industrial economy.” He doesn’t recognize that the SoHo he yearns for was precisely the product of that rapid industrial decline, which made economically available to artists and their hangers-on all those cool industrial spaces that in more industrially vibrant times would have been used by, well, industry.

Zukin declares that she “resent[s] everything Starbucks represents,” which really means that her urban ideal is the cool neighborhood at the moment before the first Starbucks moves in, an ever-more-fleeting moment. Indeed, what has changed since Jacobs’s day—and the reason, as these books attest, that gentrification has become so intense an issue—is the speed of the transition of districts from quasi dereliction to artsy to urban shopping mall. This acceleration results from the ways consumption has become the dominant means of self-expression (Zukin is perceptive on this point) and from—relatedly, ultimately—the acceleration of the global economy.

As with Manhattan, where Megan grew up, DC is an incredibly attractive  place to live and work.   They’re both geographically tiny and offer a spectacular concentration of desirable, decent paying jobs that attract talent from all across the country — indeed, the world.   Consequentially, there’s a huge supply and demand problem that’s not getting any better.

Even for those earning good wages, DC housing is prohibitively expensive.   And that’s especially true of the areas very close to Capitol Hill, the White House, and the K Street corridor.     Being close to work and within walking distance of great restaurants, night life, and other amenities comes at a steep price.

Most of us who work in DC have chosen to live in the near suburbs of Virginia and Maryland and others even further into the exurbs, trading time and easy access for living space, amenities, and safety.  Others, like Megan and Peter, have decided that the best recourse is to move to less desirable parts of town, trading safety for reasonable proximity and affordability.

The alternative to gentrification is, alas, not that these transitional neighborhoods would remain what they were in their glory days.  Exorbitant property taxes, tightening building codes, and other pressures would force a death spiral in which the homes further dilapidated and businesses shuttered.  While it seems only right that people who have lived in a neighborhood for generations should get to continue to live there, the fact of the matter is that they simply couldn’t afford to do it.

But there’s a free market solution to this tragedy!  The very thing that Megan laments, in fact!  It starts with G and rhymes with centrifugation.    Owners trapped in single family homes they can’t afford to maintain find some young white saps to come in and give them ten times what they paid for the place.   Landlords kick out the people who can’t pay the skyrocketing rents and take in trust fund kids from Harvard and charge them enough to pay for rewiring, painting, and exterminators.

Is it a little sad that a second generation DC bus driver is forced to sell his home and move out to the suburbs?   Sure.   But, really, it’s not any more of a tragedy than that some people have to ride a bus, others can drive themselves  a Toyota Camry, others can do so in a 7-series BMW, and others get chauffeured  by a car service.   We allocate scarce and desirable resources on the basis of price as a matter of course.

Naturally, government could step in and try to address the problem by putting its thumb on the scales.   We could do what California did a generation ago with Proposition 13, capping the rise of property tax rates for existing homeowners.    Or, we could use New York’s model and enact rent control.    But, while these measures may be “fair” in the sense of allowing people to remain in their homes despite the vagaries of the market, they do so by transferring the costs to others.

The free market isn’t the solution to every problem.  But it’s actually quite efficient in handling this one.

__________
*For the uninitiated, this coinage is Megan’s label for her partnership with husband Peter Suderman.  It was wisely chosen in preference to my own earlier but lazier coinage, McSuderman.