The prospects for a bipartisan infrastructure deal dimmed even further Monday, as Senate Republicans alleged that the White House had agreed to narrow the scope of its $2.2 trillion plan — only to reverse course days later.

Apart from genuine interest in the legislation itself, this story struck me for several reasons.

First, unlike some of the more dramatic (and very real) concerns about the health of our democracy, this story could have been written about any number of interactions between the parties over the years. It is mundane in its own way.

Consider: the Reps want to cut the amount of spending, limit the bill’s scope, and don’t want to increase taxes to pay for it. Meanwhile, Dems want to spend more on the package, see its scope as broader, and think taxes should be raised to pay for it.

And, both sides are trying to play the refs (i.e., the voting public) in the press.

It is all so blissfully normal.

Second, and apropos to more recent discussions on this site, the main reason the Republicans have leverage is more about Senate rules than voting strength. While there is the possibility that the bill could be moved through the Senate via the reconciliation process (thus avoiding a filibuster), the fact remains that getting the bill through the Senate will require maneuverings through Senate rules rather than simply a matter of a straightforward vote of the chamber as it is likely that even if reconciliation is used, there will have to be substantial changes to the current version of the proposal (see, for example, this Politico piece from last month: Biden’s infrastructure plan heads for the Senate shredder).

This is yet another example of how even when a party wins “control” (scare quotes intended) of all three branches of the federal government that is not able to govern without overcoming a minority-veto in the Senate.

This is also a good time to note, yet again, that the 50 votes the Republicans have represents far fewer people than the 50 who are represented by the Democrats.

In terms of the negotiations, it is striking to me that the opening Biden was $2.2 trillion, and the Biden administration indicated it might be willing to cut out up to $500 trillion.

Meanwhile, the GOP offer is summarized as follows:

Republicans, for their part, put forward an infrastructure counteroffer of their own last week that frustrated Democrats — and barely budged from the GOP’s initial bargaining position. Capito had originally proposed $568 billion, much of which entailed money that Congress already planned to spend. She revised the overall price tag to roughly $800 billion, but the new number reflected only a slight change, as the GOP agreed to heightened infrastructure spending over eight years instead of five.

But, of course, I take all of these negotiations in the press to be grain-of-salt worthy.

*Off the top of my head, I am not sure when the last time there was a confluence of Republican control with Senate Republicans also representing a majority of the population–I just know it has not been the case in the 21st Century). 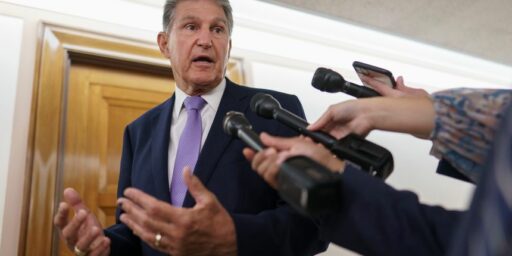