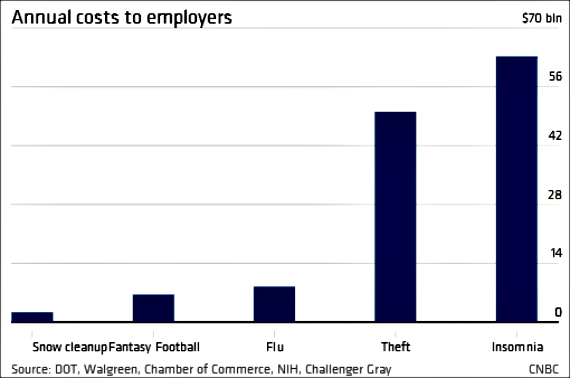 With the back to back ice/snow storms that hit the Washington, D.C. area earlier this week, the Federal Government along with many businesses were either shutdown for the day, opened late, or employees were given the option of taking leave for the day. Depending on the weather going forward, this could end up being a common occurrence this winter. Even if it is, though, it turns out that snow storms don’t really cost businesses all that much money:

[A]s much of a hassle as snow removal is, what’s more costly to employers?

Snow removal may cost a couple billion dollars a year, but even fantasy football is a lot more expensive for employers—as are the flu and insomnia, among other things.

The article does note that the study from which the chart above comes, which is based on data from the Department of Transportation, National Institutes of Health, and other sources, does not include any lost productivity from snow, which is apparently difficult for economists to estimate.