An Iraqi group threatened in a video tape aired Wednesday to kill six hostages from India, Kenya and Egypt if the Kuwaiti company they worked for did not pull out from Iraq, Al Arabiya television reported. The Dubai-based television aired the tape of what it said were the masked captors and their hostages as they demanded that the company leave Iraq. They also demanded that India, Kenya and Egypt withdraw their personnel from Iraq.

It worked with Spain and the Philippines; why not go for more?

A militant group said Wednesday it had taken two Kenyans, three Indians and an Egyptian hostage and would behead them if their countries did not announce their intention to withdraw their troops from Iraq immediately. However, none of those countries were part of the 160,000 member coalition force in Iraq.

In a statement given to The Associated Press, the group, calling itself “The Holders of the Black Banners,” said they had taken the six truckers hostage and would behead one of them every 72 hours if their nations did not pull out of Iraq and the company they work for did not close its branch here. The deadline starts from 8 p.m. Wednesday, it said. “We have warned all the countries, companies, businessmen and truck drivers that those who deal with American cowboy occupiers will be targeted by the fires of the Mujahedeen,” the statement said. “Here you are once again transporting, goods, weapons and military equipment that backs the U.S. Army.”

In photos provided to AP with the statement, six of the hostages are shown standing behind three seated, masked gunmen. One of the hostages holds a paper with the typed names of seven men presumably six of them were the hostages their nationalities, passport numbers and the registration numbers of the trucks they were driving. The paper is stamped July 20 and the words “Universal Services” were handwritten on top. The names on the paper were Ibrahim Khamis, from Kenya, Salm Faiz Khamis, from Kenya, Jalal Awadh, from Kenya, Antaryami, from India, Tilak Raj, from India, Sukdev Singh, from India, and Mohammed Ali Sanad, from Egypt. It was not clear which of the Kenyans listed on the paper was not among the hostages. From the statement, the trucking company that employed the men appeared to be based in Kuwait.

The statement came a day after militants released Filipino hostage Angelo dela Cruz after his country gave in to their demand and pulled its 51-member force out of Iraq. That pullout led to fears militants would try to take more hostages. 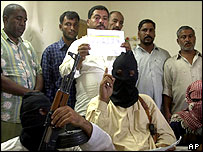 A previously unknown Iraqi group says it has taken six hostages and will start to kill them unless their Kuwaiti employer pulls out of the country. The group, calling itself The Holders of the Black Banners, said it had seized six truck drivers – three Indians, two Kenyans and an Egyptian. The group said all who dealt with “American cowboy occupiers” would face “the fires of the Mujahideen”.