Did the Founding Fathers make it too hard to amend the Constitution? No, they didn't. 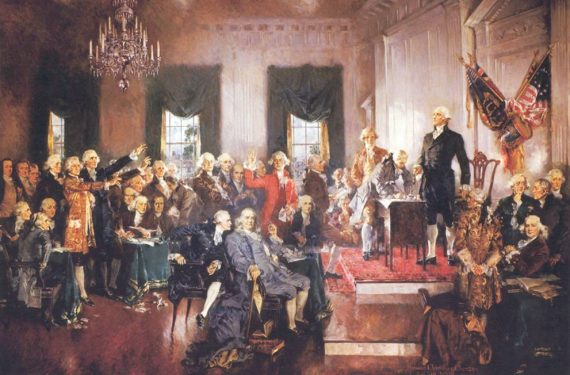 University of Texas Law Professor Sanford Levinson calls the Constitution “imbecilic” in the way it makes the document difficult to amend:

If one must choose the worst single part of the Constitution, it is surely Article V, which has made our Constitution among the most difficult to amend of any in the world. The last truly significant constitutional change was the 22nd Amendment, added in 1951, to limit presidents to two terms. The near impossibility of amending the national Constitution not only prevents needed reforms; it also makes discussion seem futile and generates a complacent denial that there is anything to be concerned about.

It was not always so. In the election of 1912, two presidents — past and future — seriously questioned the adequacy of the Constitution. Theodore Roosevelt would have allowed Congress to override Supreme Court decisions invalidating federal laws, while Woodrow Wilson basically supported a parliamentary system and, as president, tried to act more as a prime minister than as an agent of Congress. The next few years saw the enactment of amendments establishing the legitimacy of the federal income tax, direct election of senators, Prohibition and women’s right to vote.

No such debate is likely to take place between Barack Obama and Mitt Romney. They, like most contemporary Americans, have seemingly lost their capacity for thinking seriously about the extent to which the Constitution serves us well. Instead, the Constitution is enveloped in near religious veneration. (Indeed, Mormon theology treats it as God-given.)

Levinson is certainly correct that it’s difficult to amend the Constitution. After all, in order to do so, you need to get the agreement of 290 members of the House of Representatives, 67 Senators, and both Houses of the State Legislatures of 38 states. Given how closely divided this country is on even the seemingly simplest issues, the odds of getting that kind of agreement with the seven year time limit that every Amendment submitted to Congress since the 1970s has contained are fairly low. Indeed, this is why it has been forty-two years since a Constitutional Amendment was ratified by both Houses of Congress and by a sufficient number of states.1  In fact the gap between the adoption of the 26th Amendment and today is the third-longest such period in American history, the longest being the 61 years between the ratification of the 12th Amendment and the ratification of the 13th Amendment, and the second-longest being the 43 years that elapsed between the 15th Amendment and the 16th Amendment. So, yes, Levinson is correct that it is hard to amend the Constitution.

The one thing Levinson doesn’t do, though, is make a cogent argument for why this is a bad thing, in fact it really doesn’t make any argument in that regard at all.  Instead, he points out the fact that nearly all of the 50 State Constitutions are far easier to amend than the Federal Constitution, most typically by some form of legislative vote followed by a referendum. This is true, but it doesn’t really answer the question of why Article V, which allows for Amendment either via the process described above or via a Constitutional Convention called by two-thirds of the states, is somehow defective or needs to be changed.

It’s too bad, really, because I would have enjoyed hearing an argument from Levinson’s point of view on this issue. I likely would’ve disagreed with it, but one does not benefit from not exposing oneself to opposing points of view. As it stands, I cannot see any reason why it should be easier to change the fundamental building blocks of our political system. Making it easier for a majority, or a smaller supermajority, to change the rules of the game means that the minority’s rights would likely not be sufficiently protected and, considering the fact that there are plenty of people out there who would love to amend the Constitution to limit the rights of one minority group or another, that isn’t a good thing at all. One need only look at the ease with which a movement motivated mostly by mass hysteria was able convince the American people to amend the Constitution to ban alcohol to see the dangers that would be created by making such amendments easier to accomplish. Indeed, the very State Constitutions that Levinson points to as a guide are also a reason for caution given the ease with which nearly two-thirds of the states have amended their Constitutions via majority will to deny equal protection of the laws to people merely because they are homosexuals.

The Founders made it hard to amend the Constitution for a very specific reason, because the changes that could be potentially made via amendment could be so fundamental that it ought to be the case that whatever change is desired is supported by a large majority of the people. I don’t really see any reason to change that.

1 The Twenty-Seventh Amendment was ratified in 1992 but it had first been sent to the states in 1791 along with the other Amendments that became the Bill Of Rights. Since there was no time limit on ratification at the time, the final ratification of the 38th state in 1992 was sufficient to make it part of the Constitution. Indeed there are several other Amendments that were passed by Congress and sent to the States but never ratified that are, technically at least, still alive.