General Jim Jones is stepping down as National Security Advisor. 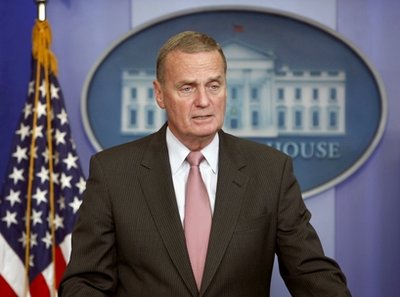 National security adviser Gen. James Jones is stepping down, two senior administration officials said Friday, amid a series of key White House personnel changes as President Barack Obama approaches the midpoint of his term. Obama will announce in a Rose Garden ceremony later Friday that Jones will be replaced by his top deputy, Tom Donilon. Jones’ resignation will take effect in two weeks.

The move, though expected, is the latest high-profile departure among Obama’s leadership team. Chief of staff Rahm Emanuel left just last week, and the president is expected to see more change at the top as Obama’s tenure nears the two-year mark and the grinding pace of the White House takes a toll.

Jones, who retired from active duty in February 2007 after more than 40 years of uniformed service, had planned all along to leave the national security adviser’s post within two years, said one official. The officials spoke on condition of anonymity because the president had not yet announced the decisions.

White House aides say Jones put his stamp on Obama’s major foreign policy decisions over the last 20 months, including a larger troop presence in Afghanistan, a winding down of the war in Iraq and a retooled relationship with Russia.

Jones retained clout and contacts across the military after a career as a highly-decorated Marine. He retired as a four-star general, the highest grade currently in use. Jones’ military career also gave him good access to foreign leaders, military chiefs and U.S. lawmakers.  His role was sometimes described in business terms, as the closer. In essence, others might do a lot of legwork to get something the United States wanted, but Jones could pick up a telephone, call the right person, and bring the deal home.

Administration officials said they expect him to go into a semi-retirement in which he will likely serve on boards and offer counsel to the White House.

While the timing is unexpected, the news isn’t.  Jones has been the subject of internal backstabbing from almost the beginning, with junior staffers apparently unhappy with his working hours and management style.   And Jones, while skilled at politics, was not part of the campaign team and therefore somewhat of an outsider.   And, frankly, he doesn’t need the grief or the pay cut.