In news you've known for years, Jodie Foster has announced that she's a lesbian. 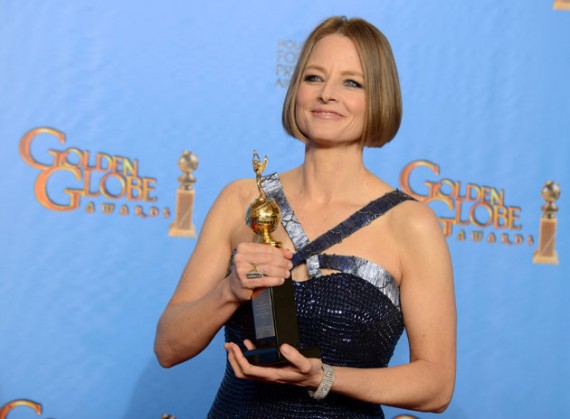 In news you’ve known for years, Jodie Foster has announced that she’s a lesbian.

Jodie Foster came out without really coming out, and suggested she was retiring from acting without exactly saying so, in a long, breathless and rambling speech at Sunday night’s Golden Globe Awards.

Foster took the stage as this year’s winner of the Cecil B. DeMille Lifetime Achievement Award, which had been announced previously. But her acceptance speech was anything but predictable as the veteran actress seized control of what is every year a noisy, boozy ballroom; the crowd of A-listers quickly quieted down as it became apparent that she had something serious and important to say.

The 50-year-old Oscar-winner for “The Silence of the Lambs” and “The Accused,” who’s been protective of her private life and reluctant to discuss her sexual orientation, was coy at first, suggesting she had a big announcement that would make her publicist nervous (the broadcast audio dropped out at this point, but for no apparent reason; nothing was said off-color). Then she stated: “I’m just going to put it out there, loud and proud … I am, uh, single,” pausing for dramatic effect before that last word. “I hope you’re not disappointed that there won’t be a big coming-out speech tonight. I already did my coming-out about a thousand years ago back in the Stone Age.”

Foster joked that celebrities are now expected to reveal they’re gay “with a press conference, a fragrance and a prime-time reality show. And you guys might be surprised, but I am not Honey Boo Boo Child. No. I’m sorry. That’s just not me. It never was and it never will be. But please don’t cry, because my reality show would be so boring.”

She added defiantly: “If you had been a public figure from the time that you were a toddler, if you’d had to fight for a life that felt real and honest and normal against all odds, then maybe you, too, might value privacy above all else.”

Foster thanked Cydney Bernard, a production manager whom she identified as “my heroic co-parent, my ex-partner in love but righteous soul sister in life,” her former partner of 20 years — a relationship she never hid and from which she has two sons.

So, now you know. Not that you didn’t already.