Matt Yglesias takes ESPN’s Bill Simmons to task for arguing that Kobe Bryant and Michael Jordan “might compare statistically and stylistically, but Jordan could command a room of 10 people or 20,000 and get the exact same reaction: Every set of eyes trained on him for as long as he was there. His personality, his charisma, his aura, his passion … indescribable. Like nothing I have ever seen.”

The reason “we’re never seeing another Jordan” is precisely because they don’t compare statistically. It’s truly not even close, and I really don’t understand why people sometimes say things like this. When Kobe Bryant was 21, he put up 22.5 points, 6.3 rebounds, and 4.9 assists per game. Jordan got 6.5 rebounds, offered 5.9 assists, and scored 28.2 points. And not because he was shooting more, because he was shooting better with a TS% of .592 to Kobe’s .546. In Kobe’s most efficient scoring season, he put up a .580—worse than Jordan’s rookie year. Jordan did better than that in six different seasons, and maxed out at .614 in the 1988-89 season. In Kobe’s most prolific scoring season he got 31.1 points, in Jordan’s most prolific season he got 33.4 points per game. Jordan consistently snagged more rebounds and dished out more assists. And he did it all before they changed the rules to make things easier for guards!

I’d quibble only slightly:  As Matt has just demonstrated, Jordan and Bryant do compare statistically; it’s just that said comparison reveals that Jordan was a whole lot better. 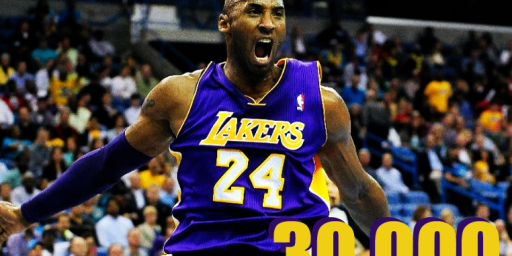