Barring shocking developments, General Joe Dunford will be the 36th Commandant of the Marine Corps. 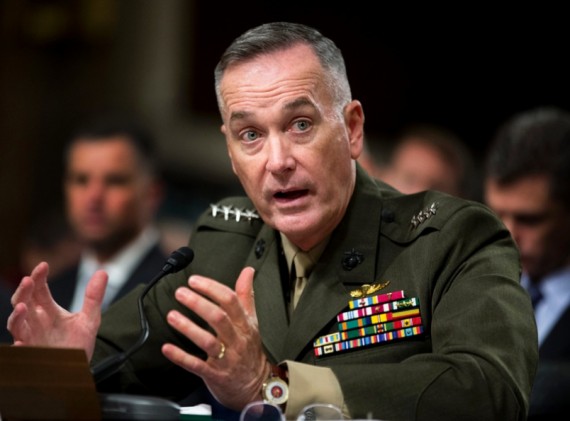 Barring shocking developments, General Joe Dunford will be the 36th Commandant of the Marine Corps.

Defense One (“Obama Picks Dunford as Next Marine Corps Commandant“):

Gen. Joseph Dunford, the top U.S. military commander in Afghanistan, has been nominated by the president to be the next commandant of the Marine Corps.

The nomination—subject to confirmation by the Senate—leaves open the question of who will take command of the roughly 50,000 U.S. and NATO troops in Afghanistan during a pivotal year as the 13-year war comes to an end.

In a statement, Marine Commandant Gen. James Amos called Dunford “one of the most knowledgeable and talented leaders and thinkers in the military today. He has commanded and excelled at every level.” He called Dunford’s service in Afghanistan” extraordinary and is testament to the full measure of the man. Our country and our Marine Corps will benefit greatly from his continued service.”

As an infantryman, he’s a more traditional choice than Amos, the first aviator to serve as commandant. Before taking over ISAF, Dunford was Amos’ Deputy Commandant, so he’ll have no trouble hitting the ground running in his new role. Dunford has only been in charge of ISAF since June of last year. Aside from an exemplary record as a Marine officer, he holds impressive academic credentials:

Dunford earned his undergraduate from St. Michael’s College and was commissioned into the Marine Corps in 1977. He holds an M.A. in International Relations from the Fletcher School of Law and Diplomacy as well as an M.A. in Government from Georgetown University.

Dunford will take over at a tumultuous time for the Corps, which is in the process of shrinking from its post-9/11 expansion and struggling to get back to its expeditionary roots.

Amos has been a controversial Commandant, not only because of kerfuffles over unlawful command influence in sexual harassment cases and trying to punish the Marine Corps Times for some unflattering pieces but because his not unreasonable attempts to tighten up discipline in the wake of a dozen years of deployment have rubbed a lot of Marines, the officer corps in particular, the wrong way. While I have no doubt that standards grew somewhat lax during wartime—they always do—Amos often gave the impression that he believed Marine leaders weren’t doing their jobs. Given that they were busy leading Marines through two major wars, that’s rather insulting.