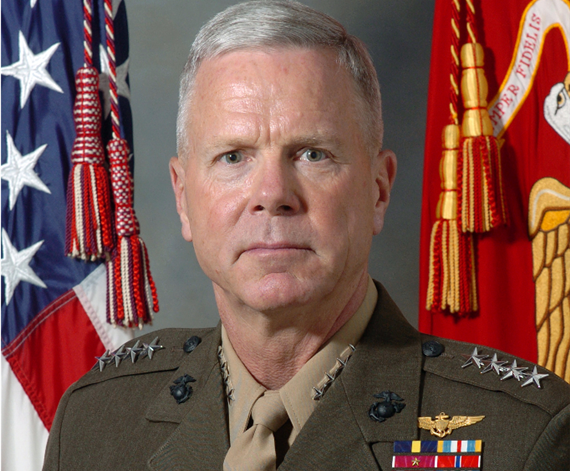 James Mattis, who heads US Joint Forces Command, was widely considered the favorite to become the next Commandant of the Marine Corps.  Instead, an aviator with no experience fighting ground wars has been tapped.

Defense Secretary Robert Gates has recommended that Gen. James Amos will be the next commandant of the Marine Corps, POLITICO has learned. Lt. Gen. Joseph Dunford has been recommended to be assistant commandant.  President Obama has not yet nominated either individual, according to defense sources, but the recommendations were recently sent to the White House.
Amos, already the Corps’ No. 2 officer, would be the first aviator to lead the service. The selection of Amos is a huge upset since the choice was thought to be between two known infantry officers: Dunford, and Gen. James Mattis. Both men had long been considered frontrunners and brought to the job different reputations and backgrounds at a time when the Corps endeavors to re-establish its sea-service identity after more than eight years of fighting wars in largely landlocked regions.

Gates was expected to want a leader who would help focus that effort. But the deliberations over who would lead the Corps also included discussions on whether gays and lesbians should be allowed to serve openly as well as well as the future of the Corps’ favorite ground combat vehicle, the General Dynamics-made Expeditionary Fighting Vehicle, say officials in and outside of the Pentagon.

In recent years, presidents and defense secretaries have broke with tradition several times in choosing senior military posts.  We’ve had our first Special Operations and first Marine Chairman of the Joint Chiefs of Staff and our first Marine and Navy Supreme Allied Commander Europe.  There’s no reason an aviator can’t serve as Marine Commandant.  Further, Amos has done a tour in Iraq and has commanded II Marine Expeditionary Force.   He’s perfectly qualified to lead Marines during wartime.

Still, it seems an odd time to make this choice.  With the Marines actively engaged in two ground wars, you’d think a guy who has led an infantry division or corps in Iraq or Afghanistan would be the favorite.  It seems  that politics was the chief consideration here.  Did Gates think Mattis was unwilling to lead the integration of gays into open service?  Or that he’d fight to keep the EFV?

UPDATE (July 8):  While this move was certainly not intended three weeks ago, Mattis has arguably landed in an even better slot:  succeeding David Petreaus as head of CENTCOM.   Until Stanley McChrystal’s infamous Rolling Stone interview, that opening was not foreseen.