There's a political scandal brewing in Canada just as that nation starts looking ahead to elections later this year. 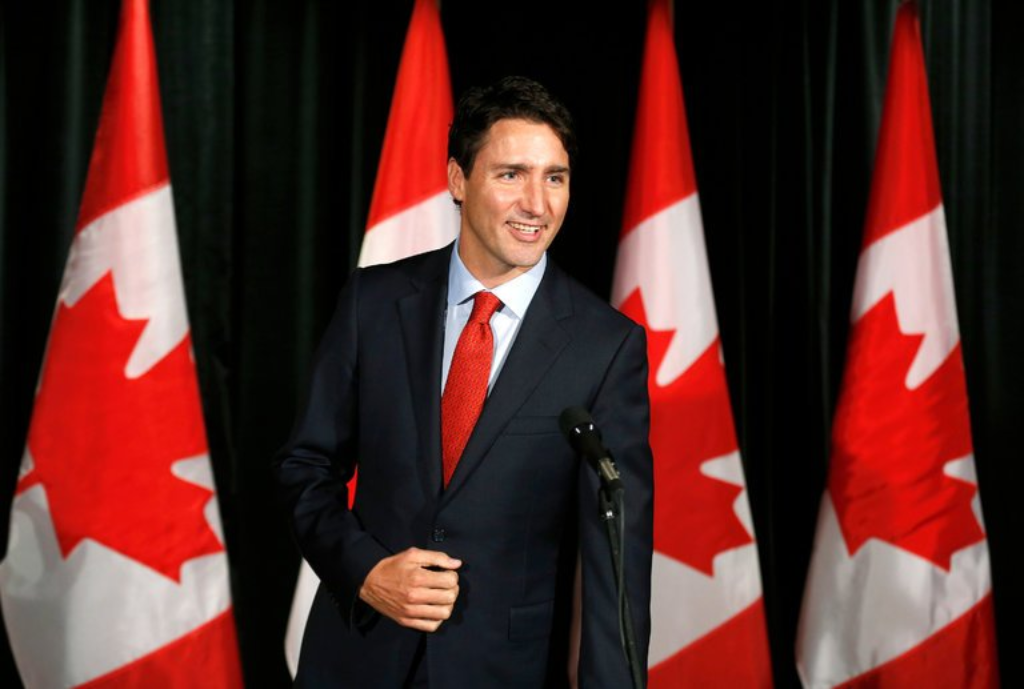 While the United States deals with the ongoing political crisis known as the Trump Administration, there’s also a crisis brewing north of the border and it’s already cost Canadian Prime Minister Justin Trudeau two of his cabinet members:

OTTAWA — Another minister in the cabinet of Prime Minister Justin Trudeau of Canada quit in protest on Monday over accusations that he and his aides tried to influence a criminal case against a multinational Canadian company accused of bribing the Libyan government.

The unexpected resignation, by Jane Philpott, who led the treasury board, inflames a growing political crisis that has already cost Mr. Trudeau his former justice minister and his top aide.

“I’ve been considering the events that have shaken the government in recent weeks and after serious reflection, I have concluded that I must resign as a member of cabinet,” said Ms. Philpott, who was also a former health minister and minister of Indigenous affairs.

Speaking to a Liberal party rally in Toronto on Monday night, Mr. Trudeau thanked Ms. Philpott for her service.

“I know that Ms. Philpott has felt this way for some time,” Mr. Trudeau said during a speech, which was occasionally interrupted by hecklers. “While I’m disappointed, I understand her decision.”

Mr. Trudeau said that the political controversy “has generated important discussion” and added that “there are more questions to be answered and more to be said in the coming days and weeks.”

With a federal election looming seven months away, Mr. Trudeau must now not only salvage his reputation as someone who promised an open approach to politics, but may be in peril of losing control of his position as leader of the Liberal Party, which would end his time as prime minister.

On Monday, Andrew Scheer, the Conservative leader, repeated his call for Mr. Trudeau to step down and called on other cabinet ministers to follow Ms. Philpott’s example.

In announcing her decision, Ms. Philpott cited accusations that Mr. Trudeau and his aides had exerted improper and excessive pressure on the justice minister and attorney general at the time, Jody Wilson-Raybould, to seek a settlement in the criminal case against the company, SNC-Lavalin.

A criminal conviction would have barred the company from bidding on government contracts for a decade, potentially leading to major job losses in Quebec, where it has its headquarters. . Trudeau.]

Ms. Wilson-Raybould resisted the pressure, and quit the cabinet last month. Ms. Philpott was among the few cabinet ministers to publicly side with her.

“There can be a cost to acting on one’s principles, but there is a bigger cost to abandoning them,” Ms. Philpott wrote in her resignation letter to Mr. Trudeau on Monday.

Privately, several members of his caucus have said Mr. Trudeau has badly fumbled his handling of the controversy. Publicly, though, they have spoken in solidarity with the prime minister.

An earlier report in The New York Times describes the nature of the scandal that has erupted in Ottawa:

TORONTO — Prime Minister Justin Trudeau of Canada promised a fresh approach to politics, one that was based on openness, decency and liberalism.

Now he is embroiled in a scandal involving accusations of back-room deal-making and bullying tactics, all to support a Canadian company accused of bribing the Libyan government when it was run by the dictator Muammar el-Qaddafi.

Canadian newspapers are filled with outrage and opposition parties are calling for a resignation. Elections are still seven months away, but some members of Mr. Trudeau’s own governing party fear the scandal has armed opposition parties with rich campaign fodder against its leader, who promised “sunny ways” in politics.

“This is a huge, huge blow to Justin Trudeau’s personal brand and Justin Trudeau’s promise of doing politics differently,” said Shachi Kurl, the executive director of the Angus Reid Institute, a nonprofit polling firm based in Vancouver.

She added: “That shine is not dented or scratched. It’s been completely scuffed.”

The prime minister and his aides have been accused of pressuring his justice minister at the time, Jody Wilson-Raybould, to drop the criminal inquiry against the company because a conviction could potentially cost thousands of jobs in Canada, and diminish his Liberal Party’s political fortunes.

She did not drop the inquiry, and in January was demoted to a lesser position in the cabinet, a reassignment that many of Mr. Trudeau’s critics believe was punishment for letting the case continue. Ms. Wilson-Raybould later quit that post.

The scandal has been building slowly over weeks and already led to the resignation of Mr. Trudeau’s top political aide, and to Parliament’s ethics commissioner opening an investigation into potential conflicts of interest.

And on Wednesday, Ms. Wilson-Raybould appeared before the House of Commons justice committee, breaking weeks of silence.

On live television, she calmly described the demands and “veiled threats” she received over four months from Mr. Trudeau’s office to accept a settlement in the criminal case.

“There was a concerted and sustained effort to politically influence my role as attorney general,” said Ms. Wilson-Raybould, who, as the first Indigenous person to hold the prestigious post of justice minister and the only Indigenous person in Mr. Trudeau’s cabinet, was a powerful symbol of his government’s commitment to both women and Indigenous rights.

Mr. Trudeau has denied that he or anyone else acted inappropriately in their dealings with Ms. Wilson-Raybould. He has stressed that he has been trying to protect Canadian jobs, as “Canadians expect their government” to do, while respecting the country’s laws and independence of the judiciary.

But so much of politics is appearances, and the optics are terrible — of a self-described feminist, who had promised a new, open and transparent way of governing, sending aides described as his henchmen to gang up on an Indigenous woman in efforts to bend her will.

Ms. Wilson-Raybould’s appointment to justice minister had seemed proof to many that Mr. Trudeau was serious about correcting the country’s wrongs against its Indigenous population and treating Indigenous people as respected partners in the country, as he had promised during the election.

Now, that legacy is in question because of Ms. Wilson-Raybould’s demotion to the post of veterans affairs minister, which she quit last month.

Perhaps the most troubling of the meetings she described was one with Mr. Trudeau himself, who asked her to “find a solution here for SNC,” stating that “there would be many jobs lost and that SNC will move from Montreal,” she said.

There was a provincial election coming up, the prime minister reminded her during that meeting, she said, and he personally had been elected from that area.

But what many legal experts found most problematic about her testimony was the suggestion that the prime minister and his top aides brought up political concerns.

Errol Mendes, a law professor at University of Ottawa who studies the role of the attorney general, said that while it was legitimate for the prime minister and others to raise the job losses, when they raised political issues, “that’s straying into absolutely inappropriate pressure.”

As noted, all of this is happening at the same time that attention in Canada is turning to the upcoming Federal Elections, which must be held no later than October 21st of this year. So far, those elections have not been scheduled, and it’s likely that Trudeau will try to wait things out until the last possible moment before pulling the trigger and scheduling a vote. As things stand right now, though, polling would seem to indicate a close election between Trudeau’s Liberal Party and the Conservatives if the election were held today, and the possibility that things could get worse for Trudeau if this controversy drags on over the coming seven months. If the polls stay where they are, the likely outcome would seem to be one where neither of the two major parties ends up with a sufficient majority to form a government on their own, thus forcing them to look to the smaller parties, such as the New Democratic Party, Realistically speaking, though, the New Democrats would seem to have more in common with the Liberal Party than they ever will with the Conservatives, but as other races in Parliamentary governments have shown, that isn’t always the deciding factor when it comes to determining if a coalition is possible. One other possibility is that this ongoing scandal could lead Liberal Party voters to abandon Trudeau in favor of either the Conservatives or the New Democrats. If that happens, then Trudeau could find himself and his party back in the political wilderness just four years after scoring a major electoral victory.

Judging this from a distance, this appears to be a political blow against Trudeau for two reasons. First, there’s the fact that when he became Prime Minister Trudeau prided himself on the fact that his Cabinet was diverse and made up of men, women, and representatives of several of Canada’s major minority groups. At the core of this apparent scandal is the fact that Trudeau and his aides were allegedly trying to pressure the Justice Minister, a woman, to go soft on a company with close ties to Trudeau and his supporters. This hardly fits in well with Trudeau’s self-professed feminism and looks for all the world like an effort to intimidate a woman into falling in line with political pressure. Second. prior to this Trudeau had a relatively clean reputation as an honest dealer and political leader. The accusation that he sought to manipulate the justice system to help a political ally goes a long way toward tainting that image, and that could have a big impact on the elections that will have to take place sometime this year.

As a general rule, Americans don’t pay much attention to Canadian politics, but this story is worth keeping an eye on since it could lead to major political chance north of the border depending on how it all plays out.