Kenny "The Snake" Stabler, legendary Alabama Crimson Tide and Oakland Raiders quarterback, has died of cancer at the age of 69. 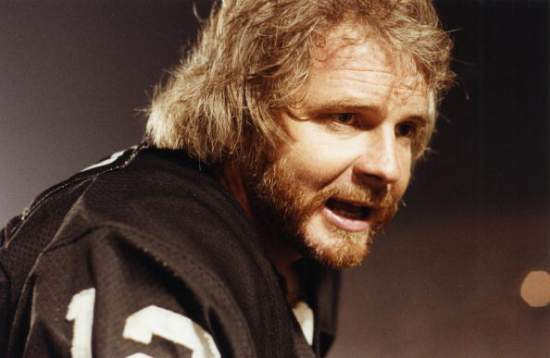 Kenny “The Snake” Stabler, legendary Alabama Crimson Tide and Oakland Raiders quarterback, has died of cancer at the age of 69.

Ken Stabler, who was one of pro football’s leading quarterbacks of the 1970s and took the Oakland Raiders to the first Super Bowl victory in their history, died Wednesday in Gulfport, Miss. He was 69.

The cause was colon cancer, which had been diagnosed in February, his family said.

One of football’s uncommon left-handed quarterbacks, Stabler was named to the National Football League’s all-decade team for the 1970s and was a four-time Pro Bowl selection though he missed out on entrance to the Pro Football Hall of Fame.

Stabler was drafted by the Raiders in 1968 out of the University of Alabama, where he played for Bear Bryant’s powerful teams.

While the Raider quarterback from 1970 to 1979, he led the N.F.L. twice in touchdown passes and twice in passing completion percentage. He was among the top 10 quarterbacks in passing yardage seven times.

His passing helped take the Raiders to a 32-14 victory over the Minnesota Vikings in Super Bowl XI in January 1977.

Stabler was known as the Snake for his elusiveness as a runner, at least in his early football years, though knee problems eventually caught up with him.

“The Raiders are deeply saddened by the passing of the great Ken Stabler,” owner Mark Davis said in a team release. “He was a cherished member of the Raider family and personified what it means to be a Raider. He wore the silver and black with pride and poise and will continue to live in the hearts of Raider fans everywhere. Our sincerest thoughts and prayers go out to Kenny’s family.”

A native of Foley, Alabama, Stabler threw for 27,938 yards during his 15-year career in the NFL, compiling a 96-49-1 record as a starting quarterback and a win over the Minnesota Vikings in Super Bowl XI. He played for the Raiders from 1970 to 1979, winning the NFL MVP award in 1974 and earning Pro Bowl honors four times.

“I was head coach of the Raiders the entire time Kenny was there, and he led us to a whole bunch of victories, including one in Super Bowl XI,” former Raiders coach John Madden said in the team release. “I’ve often said, if I had one drive to win a game to this day, and I had a quarterback to pick, I would pick Kenny. Snake was a lot cooler than I was. He was a perfect quarterback and a perfect Raider. When you think about the Raiders you think about Ken Stabler. Kenny loved life. It is a sad day for all Raiders.”

Stabler first showed his professional chops in a 1972 playoff game best known for the Immaculate Reception. Mostly forgotten was that Stabler replaced starter Daryle Lamonica and led the Raiders to what seemed to be the winning touchdown in the fourth quarter — until Franco Harris’ spectacular catch and run won the game for Pittsburgh.

An Alabama legend has passed away.

Before going on to a pro career with the Oakland Raiders, Stabler starred for Alabama under Bear Bryant from 1964-67.

Stabler’s family released a statement about his death Thursday evening. Stabler had been battling Stage 4 colon cancer since February.

The statement also said the quarterback was listening to favorite songs including “Sweet Home Alabama” as he passed away.

Former teammate Scott Hunter said Stabler was “always a fun guy to be around.” His best memory of Stabler was his most famous moment in an Alabama jersey. His 53-yard touchdown run against Auburn in 1967 won the Iron Bowl, 7-3.

“With the run in the mud, I was a redshirt sophomore standing on the sidelines with a clipboard,” Hunter said by phone Thursday evening. “He came around that right end and started running, and I thought someone surely on the Auburn team would catch him but in that mud, everyone was the same speed. He just kept running and running. I stepped out on the field about two or three paces, then a big guy stepped out in front of me. Of course it was coach Bryant. He blocked my view and I finally looked around him and Kenny kept running. He might score. And he did.”

Legendary Raiders quarterback Ken Stabler died at the age of 69 on Wednesday night due to complications with colon cancer, his former team and family confirmed.

During his seven seasons as the primary starter for Oakland, Stabler completed over 60 percent of his passes — an unheard of number during the 1970s — and led the league in touchdown passes twice.

“The Snake” garnered fame as a slippery weapon in the backfield with his college performance at Alabama under Bear Bryant, including a national championship with the Crimson Tide and the “Run in the Mud” against Auburn.

I was too young to enjoy Stabler’s heyday but was an avid Houston Oilers fan at the time he was traded to the team in 1980. He was past his prime but still a remarkable player. He certainly belongs in the Hall of Fame.