Kenneth Cole used a tongue-in-cheek reference to the Cairo protests to promote its new spring collection. 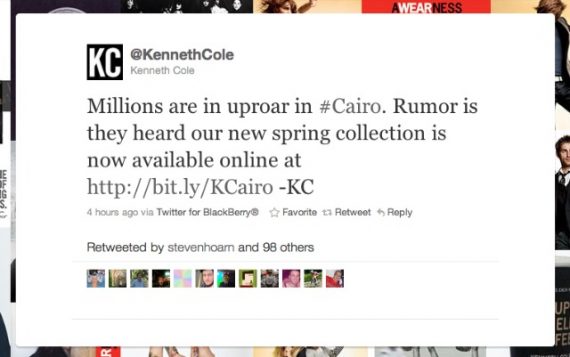 Kenneth Cole used  a tongue-in-cheek reference to the Cairo protests to promote its new spring collection.  Some were not amused:

The tweet in question reading “Millions are in uproar in #Cairo. Rumor is they heard our new spring collection is now available online at http://bit.ly/KCairo -KC” went up about four hours ago, and still remains on Twitter.

An apology, however, has been issued via a tweet reading: “Re Egypt tweet: we weren’t intending to make light of a serious situation. We understand the sensitivity of this historic moment -KC”

We’ve reached out the Kenneth Cole’s camp for more info on why the original tweet was sent.

Cole made a similarly indelicate statement in the past; following 9/11, he told the New York Daily News: “Important moments like this are a time to reflect… To remind us, sometimes, that it’s not only important what you wear, but it’s also important to be aware.”

The Twitterverse, unsurprisingly, is not happy with Cole’s 140-character missive. A fake account —@KennethColePR, à la @BPGlobalPR — has even cropped up, mocking the designer with such tweets as: “Our new slingback pumps would make Anne Frank come out of hiding! #KennethColeTweets.”

The original Tweet has been disappeared but it’s been replicated above.

I’m less sensitive than some, apparently, because I find the tweet fairly clever.  Alas, while I would have defended it had it been issued earlier in the crisis, its issuance after violence erupted was in bad taste.  This isn’t some smartass on the Internet; it’s a significant international brand.

The Discovery Institute, Intelligent Design and the Designer