Today I leave for a few weeks’ vacation, and when I return, I will come back in yet another incarnation.

I am a transsexual sportswriter. It has taken more than 40 years, a million tears and hundreds of hours of soul-wrenching therapy for me to work up the courage to type those words. I realize many readers and colleagues and friends will be shocked to read them.

Kristen Fyfe of Newsbusters is aghast.

While no one can deny that Penner has been through some intense personal struggles, his column read like a brochure from the Gay & Lesbian Alliance Against Defamation (GLAAD). One wonders how many young sports fans opened up the paper to find out how their favorite team did and ended up with an unexpected sex-ed lesson.

I’m not sure what else Penner should have done, presuming s/he was going to go through with the surgery. Presuming that he’s built up a following in 23 years doing all those things at The Times, he owes it to his fans to let them know why Mike Penner suddenly disappeared from the paper and was replaced a few weeks later by a Christine Penner. [UPDATE: Apparently, the last name will change as well and s/he will become “Christine Daniels.”]

I don’t pretend to understand what someone who is so sure that their body doesn’t match up with their sexual identity goes through, let alone someone who has lived 40-odd years in a man’s and is so bound and determined to finally look like the woman he thinks he is to do the things required to make that transformation. Fortunately, I’ve always been among the vast majority whose sexual identity and orientation conformed with his biology. And, frankly, I’m Southern and small-c conservative enough to find the whole thing more than a little odd.

Then again, I’ve known someone who has gone through the process. Ironically s/he is a sportswriter.

Chris Kahrl, one of the authors of the seminal SABR works, Baseball Prospectus, was the sports editor at Brassey’s at the time I was there on the international affairs beat. A couple months before I left, Chris announced that he was in the early stages of becoming Christina.

I lost touch with Chris (and most of the Brassey’s gang) after that but Christina Kahrl is doing quite well professionally, writing under the new byline. She’s the lead editor in the 2007 Prospectus.

Dave McKenna has an interesting interview with her in the August 26-September 1, 2005 edition of the Washington City Paper.

Giving “Christina” her first ink wasn’t something Kahrl took at all lightly. “I’ve never written publicly about my transition,” she says. “From my perspective, I don’t think of it really as a story. For me it’s about as interesting as a player’s sex life: I’m sure they have one. I hope they’re all enjoying themselves, that they’re all consenting adults. But I don’t care about it. In [the Salon piece], I also was writing about football and not baseball. So I wasn’t looking to make a story here. That [putting ‘Christina’ in print] is about as bold as I get.”

The reaction has been somewhat surprising:

[Christina] adds that her heart’s been warmed by the utter nonreaction she’s gotten from baseball and baseball-journalism folks since converting to womanhood. At insider baseball events she’s hosted at U.S. Cellular Field, home of the Chicago White Sox, and at her alma mater, the University of Chicago, all the focus has been on her knowledge of the game, even from those who knew Chris Kahrl back in the day.

“Nobody has batted an eye,” says Kahrl. “Everybody has been great and supportive, from friends and family and colleagues to everybody with the White Sox to the University of Chicago alumni. A reader said, ‘I had no idea that Chris was short for Christina.’ And I was like, ‘Yeah, that’s what it’s short for.’ But that’s it. So whatever people might be saying about the rising tide of conservatism in America today, from my experience, we’re also in a place now, a better place and a better society, than we were 50 years go. I’m certainly happy. Again, this isn’t something I broadly advertise, because it’s a secondary issue. Yes, it’s proof that life is interesting, but it doesn’t change the fact that I love baseball. I still love the game.”

Ultimately, that’s what any kid reading the sports pages will likely take away from Penner’s column. Maybe one or two of them will recognize their own struggles on the page and get the courage to talk to someone about it. I’m guessing there won’t be a mad rush to the operating room, though.

UPDATE: Christina Kahrl weighs in at BP.com. She reveals that she counseled Penner on what was to come.

In my talking with her about her transition in the weeks leading up to today’s announcement, I counseled her that my experience was that the sports world didn’t go off the rails when I transitioned in 2003. Why? Because sports is the ultimate American social bridge, and what I’ve found is that it serves as a topic that transcends lines of race, gender, class, and culture. Americans love to talk about sports, and if they find a writer or commentator with something interesting to say on the subject, they’re going to listen, or maybe argue—but most of all, they’ll engage. I learned—happily—that the readers of my column and the books that I’ve worked on couldn’t care less whether or not I’m a transsexual. Better still, I found that my colleagues still value my insights, analysis, and opinions—I could not ask for a better collection of teammates. And I’ve learned that my fellow figures in the media still make a place for me in the Fourth Estate. So, in the same way that Mike Penner’s columns have been a must-read for the Times’ audience for years, so too will Christine Daniels’.

I find it interesting that Penner is changing his last name as well. 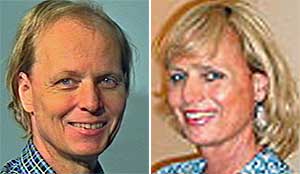