Pete Rose's efforts at rehabilitation may have just been fatally injured. 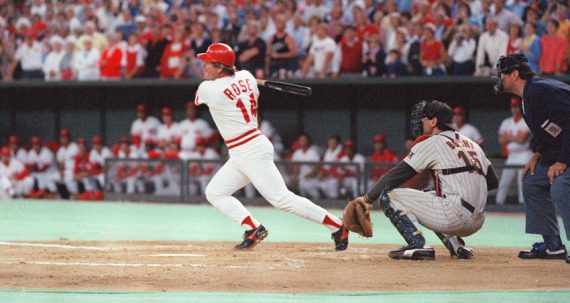 For the past twenty-five years or so, Pete Rose has operated under the claim that he only bet on baseball while he was a manager for the Cincinnati Reds and that he never bet on any games, either for or against the team he was playing for, when he was on the field, now a new investigation reveals that this is apparently untrue, likely destroying any chance of Rose being reinstated to baseball or admitted into the Baseball Hall of Fame:

Even as he fills his present as a baseball analyst at Fox Sports 1 and prepares to be part of the official activities at the All-Star Game in Cincinnati on July 14, Pete Rose cannot escape his past.

He is baseball’s career hits leader but has been on baseball’s permanently ineligible list since 1989 because he bet on baseball — and the Cincinnati Reds — when he was their manager.

But his pending bid for reinstatement by Commissioner Rob Manfred, who is expected to meet with Rose later this season, could be complicated by a new ESPN report that he also bet on baseball while he was still playing in 1986. He played part time that season — he was also the Reds’ manager — and recorded the last 52 hits of his career.

On Monday, ESPN reported that it had obtained copies of pages from a spiral notebook kept by Michael Bertolini, a former Rose associate who recorded bets that Rose made from March to July of 1986. In that period, the notebook showed that Rose bet on at least one Major League Baseball team on 30 different days. He wagered on the Reds, and there was no proof that he bet against them.

ESPN’s report, unveiled on its “Outside the Lines” program, contradicts Rose’s assertion, which he reiterated as recently as April, that he did not bet on baseball while he played.

He also denied for 15 years that he had gambled on baseball as a manager but admitted in 2004 in a book and a television interview that he had.

John Dowd, the lawyer who investigated Rose for baseball, told ESPN that the notebook “closes the door” on any possible reinstatement because it backs other proof he had that Rose bet as a player, including the testimony of a bookie, Ron Peters.

“We had all the other pieces,” Dowd said in a telephone interview on Monday. “We didn’t have the Bertolini betting book. This establishes beyond any question that Rose bet on the Reds in 1986 when he was a player. And it absolutely establishes that he was betting with the mob in New York, which was always my biggest concern, that they had a mortgage on the guy.”

The betting book was seized from Bertolini’s home by the United States Postal Inspection Service in 1989, as part of a mail fraud investigation, ESPN said. It has since been sealed by a court order.

Kostya Kennedy, the author of “Pete Rose: An American Dilemma,” said he was not surprised to hear about the betting book “because it’s been pretty well known by anyone who followed the case closely that Pete bet as a player.” He said that a year ago, Rose told him that he had not bet as a player, and added: “He has been caught in a big fat lie.”

For 26 years, Pete Rose has kept to one story: He never bet on baseball while he was a player.

Yes, he admitted in 2004, after almost 15 years of denials, he had placed bets on baseball, but he insisted it was only as a manager.

But new documents obtained by Outside the Lines indicate Rose bet extensively on baseball — and on the Cincinnati Reds – as he racked up the last hits of a record-smashing career in 1986. The documents go beyond the evidence presented in the 1989 Dowd report that led to Rose’s banishment and provide the first written record that Rose bet while he was still on the field.

“This does it. This closes the door,” said John Dowd, the former federal prosecutor who led MLB’s investigation.

The documents are copies of pages from a notebook seized from the home of former Rose associate Michael Bertolini during a raid by the U.S. Postal Inspection Service in October 1989, nearly two months after Rose was declared permanently ineligible by Major League Baseball. Their authenticity has been verified by two people who took part in the raid, which was part of a mail fraud investigation and unrelated to gambling. For 26 years, the notebook has remained under court-ordered seal and is currently stored in the National Archives’ New York office, where officials have declined requests to release it publicly.

Rose, through his lawyer, Raymond Genco, issued a statement: “Since we submitted the application earlier this year, we committed to MLB that we would not comment on specific matters relating to reinstatement. I need to maintain that. To be sure, I’m eager to sit down with [MLB commissioner Rob] Manfred to address my entire history — the good and the bad — and my long personal journey since baseball. That meeting likely will come sometime after the All-Star break. Therefore at this point, it’s not appropriate to comment on any specifics.” Bertolini’s lawyer, Nicholas De Feis, said his client is “not interested in speaking to anyone about these issues.”

The documents obtained by Outside the Lines, which reflect betting records from March through July 1986, show no evidence that Rose, who was a player-manager in 1986, bet against his team. They provide a vivid snapshot of how extensive Rose’s betting life was in 1986:

• In the time covered in the notebook, from March through July, Rose bet on at least one MLB team on 30 different days. It’s impossible to count the exact number of times he bet on baseball games because not every day’s entries are legible.

• But on 21 of the days it’s clear he bet on baseball, he gambled on the Reds, including on games in which he played.

• Rose bet heavily on college and professional basketball, losing $15,400 on one day in March. That came during his worst week of the four-month span, when he lost $25,500.

As the network goes on to note, this comes at a particularly bad time for Rose in his two decade long bid to get reinstated to baseball and become eligible for admission to the Hall of Fame in Cooperstown:

The timing for Rose, who played in 72 games in 1986, isn’t great. In March of this year, he applied to Manfred for reinstatement. Dowd recently met with MLB CIO and executive vice president of administration John McHale Jr., who is leading Manfred’s review of Rose’s reinstatement request, to walk McHale through his investigation. On Monday morning, MLB officials declined to comment about the notebook.

In April, Rose repeated his denial, this time on Michael Kay’s ESPN New York 98.7 FM radio show, that he bet on baseball while he was a player. “Never bet as a player: That’s a fact,” he said.

To Dowd, one of the most compelling elements of the newly uncovered evidence is that it supports the charge that Rose was betting with mob-connected bookies through Bertolini. Dowd’s investigation had established that Rose was hundreds of thousands of dollars in debt at the time he was banished from the game.

“Bertolini nails down the connection to organized crime on Long Island and New York. And that is a very powerful problem,” Dowd said. “[Ohio bookie] Ron Peters is a golf pro, so he’s got other occupations. But the boys in New York are about breaking arms and knees.

“The implications for baseball are terrible. [The mob] had a mortgage on Pete while he was a player and manager.”

If this evidence establishes what ESPN’s investigation contends, and it seems fairly compelling, then it would seem to be the final nail in Rose’s coffin as far as baseball is concerned. Betting on baseball has been a cardinal sin ever since the Black Sox Scandal that resulted from a conspiracy between gangsters and members of the Chicago White Sox to fix the outcome of the 1919 World Series. That scandal led to many changes in how Major League Baseball operated, including the imposition of a rule against gambling that is posted in the dugout of every stadium in the league, as well as the expulsion of several team members who remain banned to this day, including “Shoeless Joe” Jackson, who’s career numbers would arguably make him eligible for admission to the Hall of Fame. When Rose was caught gambling, it not only violated that long-standing rule but it hit the game hard because this was perhaps the most popular player of his era whose quest to break Ty Cobb’s lifetime hits record was big news in 1985. Before that, Rose came close than anyone has before or since to breaking Joe DiMaggio’s consecutive game hitting streak in 1978 with a string of 44 games where he hit safely. The revelation that this same person had violated one of the game’s cardinal rules was something of a psychological blow to fans in an era before steroids had become an issue and cynicism about players had become more widespread.

In recent years, there had been some signs of softening toward Rose. He was invited back to be part of the on-field presentation for the 2003 World Series, which marked the 100th anniversary of the game. He has been invited back to home games in Cincinnati at events marking other members of the Big Red Machine of the 1970s. The fact that Rose mostly kept his head down, didn’t embarrass himself, finally admitted in 2004 after years of denial that he had in fact bet on baseball as a manager, and there was nothing to contradict his claim that he never gambled on baseball as a player. Because of all that, there has been increasing talk of Rose being reinstated or at least allowed to gain admission to the Hall of Fame while still alive. With this report, though, and assuming that it is true, that would seem to no longer be an option. Betting while he was a player is, perhaps, not functionally much different than betting while he was a manager and arguably not as bad because as a player he couldn’t make the kind of in-game decisions that would impact the outcome of the game. Lying about it for a quarter century, though, is likely to be enough to close out any opportunity that the new regime under Commissioner Rob Manfred will be willing to revisit a decision that his predecessors considered closed.

It’s all pretty pathetic, really. Rose was without question one of the best players of his era. While he played, he had fans all across the country who didn’t care one way or the other about the fortunes of the teams he played for, including yours truly. But, he broke a cardinal rule of the game and he lied about it consistently. On some level, I was starting to feel sorry for Pete Rose and probably would’ve accepted the idea of his reconciliation with the game. With this report, that possibility is effectively closed.