A rather bizarre coda to yesterday's big Supreme Court decision.

Paul Clement and Erin Murphy represented the National Rifle Association in the case that struck down New York’s gun permit laws. Almost immediately after the decision was announced, they were ousted from their firm.

Discord over gun rights erupted within the law firm that secured Thursday’s Second Amendment victory at the Supreme Court, with Kirkland & Ellis LLP announcing shortly after the decision that it would no longer take firearms cases and that it was parting ways with the two star partners who won the case.

After a Kirkland news release praising Paul Clement, a former U.S. solicitor general in the George W. Bush administration, and Erin Murphy, the two announced they were opening their own firm.

“Unfortunately, we were given a stark choice: either withdraw from ongoing representations or withdraw from the firm,” Mr. Clement said. “Anyone who knows us and our views regarding professional responsibility and client loyalty knows there was only one course open to us: We could not abandon ongoing representations just because a client’s position is unpopular in some circles.”

Mr. Clement, whose clients include the National Rifle Association, represented its affiliate, the New York State Rifle and Pistol Association, in November arguments before the Supreme Court. Ms. Murphy worked on the case with him.

“Paul and Erin have been valued colleagues,” Jon Ballis, chairman of Kirkland’s executive committee, said in a release. “We wish them the best of luck in the future and we look forward to collaborating with them in the future in matters not involving the Second Amendment.”

Kirkland, one of the world’s largest law firms, declined to comment beyond its news release.

After recent mass shootings, other Kirkland clients began expressing reservations over the firm’s work for the gun movement, a person familiar with the matter said. Kirkland “started getting a lot of pressure post-Uvalde, hearing from several big-dollar clients that they were uncomfortable,” this person said. “Several partners agreed that they should drop that representation.”

The paper also carries an op-ed by Clement and Murphy titled “The Law Firm That Got Tired of Winning.” It begins,

We are blessed to have represented before the Supreme Court a wide variety of clients, from large corporations and religious orders to criminal defendants and Native American groups. After we prevail before the high court, we generally receive a round of congratulatory messages from law-firm colleagues for a job well done, especially when we have helped our clients vindicate their fundamental constitutional rights.

This time around, we received a very different message from our law firm. Having just secured a landmark decision vindicating our clients’ constitutional Second Amendment rights in New York State Rifle & Pistol Association v. Bruen, we were presented with a stark choice—withdraw from representing them or withdraw from the firm. There was only one choice: We couldn’t abandon our clients simply because their positions are unpopular in some circles.

Some may find this notion strange or quaint. Many businesses drop clients or change suppliers as convenience dictates. To others, the firm’s decision will seem like one more instance of acceding to the demands of the woke. But law firms aren’t supposed to operate like ordinary businesses. Lawyers owe a duty of loyalty to their clients.

A lawyer can withdraw from a representation for good reason, like a newly discovered conflict of interest. But defending unpopular clients is what we do. The rare individuals and companies lucky enough to be universally popular (for the time being) have less need for lawyers. And the least popular clients are most in need of representation, from the British soldiers after the Boston Massacre to the defendant in the Boston Marathon bombing.

Our adversarial system of justice depends on the representation of controversial clients, no matter which side has most of big law rooting for it. This is particularly true in constitutional cases. Many of our fundamental constitutional guarantees are designed to be countermajoritarian, and many have been vindicated by litigants who are deeply unpopular, but still have a right to march through Skokie, Ill., to confront witnesses against them—or to defend themselves from violence.

This isn’t the first time we have left a firm to stick by a client. What makes this circumstance different is that the firm approved our representation of these clients years ago, and dropping them would cost the clients years of institutional memory. More remarkable still, in one of the cases we were asked to drop, we prevailed in the Supreme Court on Thursday. Those who object to the representation are thus taking issue with the Constitution as interpreted by a majority of the high court.

On the one hand, Kirkland & Ellis is a massive law firm and entitled to make business decisions as to who it represents. Yes, all clients are entitled to legal representation in our system of justice. No, they’re not entitled to be represented by Kirkland & Ellis. If the management team believes that representing the NRA and other gun interests is costing them in terms of reputation or business, they’re free to run the firm accordingly.

Still, it’s not like Paul Clement is an ordinary partner. He’s a former Solicitor General and has an incredibly distinguished career. As his bio on the firm’s website (still up as of this writing) notes, he “has argued more Supreme Court cases since 2000 than any lawyer in or out of government.” That the NRA and other gun interests were among his clients was hardly a surprise to the leadership team. It’s really bizarre to change course in this fashion.

By the same token, it’s not like Clements needs the association with any particular firm to keep his clients. And one presumes Murphy goes wherever he goes.

UPDATE (8:39): Looking at the firm’s website, I see that they proclaim themselves to have a “Social Commitment” to “advancing the communities in which we live and work, and we dedicate substantial energy, talent and resources to meaningful causes and initiatives that reflect our values and vision. For us, it’s simple. We have a responsibility to make a difference and to help our communities succeed.” One can certainly make an argument that this decision is consistent with that. Then again, they had the NRA as a client and were behind this case throughout. 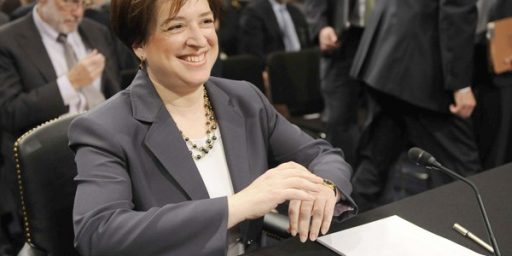