Dean Esmay likes the threat levels and is tired of people complaining:

The Homeland Security alert level has been raised to ‘High’. I wasn’t going to mention it here, because I assumed most people had heard it. But I’ve gone to many different web sites today from people who are making snarky comments about it, and it’s starting to get on my nerves. They’re saying things to imply that the information is worthless, is stupid, doesn’t do them any good or even, in a few cases, implying that it’s just an attempt to frighten us.

He goes on for several paragraphs and there’s a reasonably good discussion going on in the comments section. It’s worth a look.

My problem with the system is that it becomes background noise. There are five alert levels: Low, Guarded, Elevated, High, and Severe.

Since the inception of the system, we have always been in either Elevated or High status. Because the level is set by a bureaucracy, it will likely always be either Elevated or High. No bureaucrat is going to be willing to take the risk of lowering the level to merely Guarded or–Heaven forfend–Low because, if they do, and an attack happens, heads would roll. Likewise, we’re unlikely to see the level raised to Severe unless we’re literally in the midst of an attack and already know it. No one is going to be willing to call Red Alert and then not have an attack happen.

Indeed, Frank J’s version of the system back in May was probably more useful. 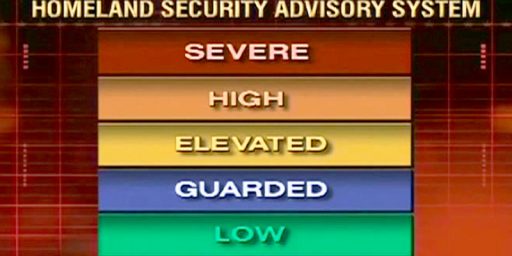 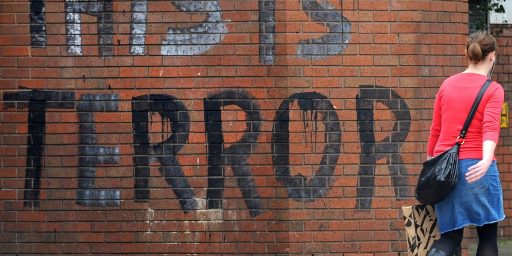