Yesterday's test of the Presidential Alert system went about as planned. 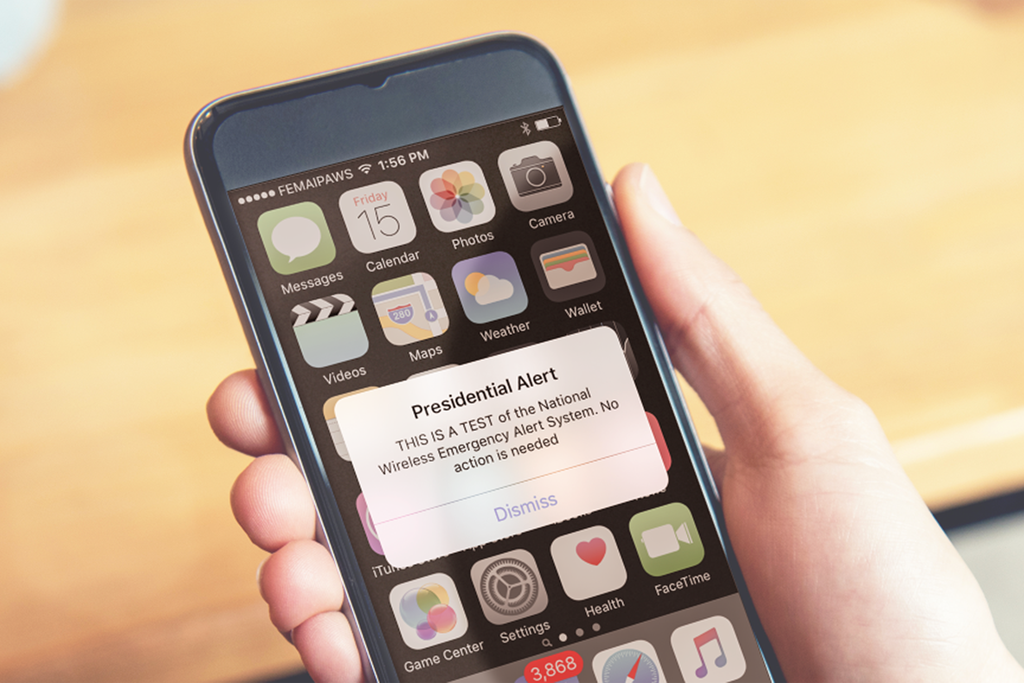 As planned, yesterday afternoon the Department of Homeland Security and Federal Emergency Management System held the first ever test of the Presidential Alert system designed to send national emergency alerts to nearly everyone with a cell phone:

At 2:18 p.m. Eastern on Wednesday, cellphones across the United States emitted the ominous ring of an emergency presidential alert.B

It was the first nationwide test of a wireless emergency alert system, designed to warn people of a dire threat, like a terror attack, pandemic or natural disaster.

“THIS IS A TEST of the National Wireless Emergency Alert System,” it read. “No action is needed.”

Two minutes later, televisions and radios broadcast test alerts. There was no notification plan for landlines.

The president — or someone he designates — would make the decision to send a real alert in case of a nationwide catastrophe, and the Federal Emergency Management Agency would push the button.

There is no opting out, which drew complaints on social media — and had already prompted a lawsuit.

Officials said before the wireless test they believed that it would reach about 75 percent of the roughly 225 million cell phones in the country, though they hoped the number would be higher.

Depending on your phone’s configuration and service provider, if you got the alert, your phone may have made a sound or vibrated, even if it was set to silent. People also received them at different times; it can take up to 30 minutes for the alerts to be transmitted to all devices.

Some things that could interfere: ongoing phone calls or data transmission, a device that is turned off or out of range, and smaller cellphone providers that are not participating in the program. It is not mandatory, but all the major cell phone providers did take part.

The Communications Act of 1934 gives the president the power to use communications systems in case of an emergency, and a 2006 law called for the Federal Communications Commission to work with the wireless industry to transmit such messages.

The F.C.C. says the resulting Wireless Emergency Alert System has been used by local governments more than 40,000 times since 2012.

The law specified that the system should allow users to unsubscribe from local alerts about extreme weather or missing children. (Here’s how to turn them off, though officials warn against it.)

But the law also states that users cannot opt out of the presidential alerts, which are issued at the direction of the president — or someone he designates, or both — and executed by the Federal Emergency Management Agency.

That raised concern, given President Trump’s proclivity for sending impulsive messages on his favorite platform, Twitter. Users there had a lot to say about the alert on Wednesday afternoon.

This test was originally supposed to have taken place two weeks ago, but it was moved to yesterday due to the fact that Hurricane Florence was hitting North Carolina at the time and authorities did not want to create confusion in that area or divert FEMA from the task of dealing with that particular emergency. In any case, the alert came through fine on my phone as scheduled. However, there was no simultaneous test of the Emergency Broadcast System that showed up on my end. That was supposed to have taken place roughly two minutes after the cell phone alert went out. Whatever the reason for that, the alert on my phone was basically just an alert sound from the phone, a short period of the phone vibrating, and a text message like the one in the photo at the top of this post. No big deal, and hardly intrusive, although I can see how it may have surprised someone who wasn’t aware the test was taking place.

Prior to the test, a group of people had filed a lawsuit aimed at stopping the test:

Three New Yorkers are suing in federal court to try to halt a test scheduled for Wednesday of a system that allows President Donald Trump or any future president to send alert messages to the cellphones of all Americans.

The activists filed the suit last week in U.S. District Court in Manhattan, arguing that the system violates their free speech rights and constitutes an unconstitutional seizure of their electronic devices.

The first-ever national test of the “presidential alert” system for mobile phones and similar devices was originally planned for Sept. 20, but it was delayed due to the onslaught from Hurricane Florence.

Wireless phone users have the ability to opt out of most alerts sent under the Integrated Public Alert and Warning System, run by the Federal Emergency Management Agency. While some users can choose not to receive regional messages and so-called Amber Alerts regarding missing or endangered children, under federal rules, receipt of the top-level “presidential alerts” is mandatory.

In the new lawsuit, J.B. Nicholas, Kristine Rakowsky and Liane Nikitovich contend that the system will effectively turn them into “government loudspeakers” that would allow Trump or others to disseminate propaganda.

A law signed by President Barack Obama in 2016 says that, except for testing, the emergency alert system “shall not be used to transmit a message that does not relate to a natural disaster, act of terrorism, or other man-made disaster or threat to public safety.”

However, the plaintiffs in the suit call those criteria “unconstitutionally vague.”

“Without more specific definitions…officials — including President Trump — are free to define ‘act of terrorism’ and ‘threat to public safety’ as they see fit, potentially broadcasting arbitrary, biased, irrational and/or content-based messages to hundreds of millions of people,” the complaint claims.

Nicholas, Rakowsky and Nikitovich accuse Trump of disseminating “weaponized disinformation” on Twitter and say they “don’t wish to receive text messages, or messages of any kind, on any topic or subject, from Defendant Trump.”

Justice Department spokespeople did not immediately respond to requests for comment on the suit, which was filed last week and made public by the court on Monday.

The lawsuit had asked the Judge assigned to the case to issue an injunction stopping the test, but that request was denied.  Reading the Complaint itself, the argument seems to me to be rather silly and not really based on any legal principles that can be enforced by a Court. Essentially the Plaintiffs argue that the Presidential Alert system turns their phones into “loudspeakers” for government propaganda and that the statutory limitations placed on the use of the alerts are “unconstitutionally vague.” Neither one of these arguments strikes me as having much merit. The idea that receiving an alert message is somehow a violation of the First Amendment is quite simply not consistent with the current state of First Amendment law, and seemingly not supported by any relevant case law. On the second point, the Plaintiffs do not point to any examples of misuse of either this system or the Emergency Broadcast System that would justify the concerns that they allege. Of course, the fact that the lawsuit has been filed by three pro se Plaintiffs suggests that they could not even find a lawyer willing to sign their name to a lawsuit as ridiculous as this one. To the extent that this lawsuit is still relevant after yesterday’s test, I would expect it to be dismissed.

All of this brings to mind the incident that occurred earlier this year in Hawaii when a similar statewide system was mistakenly used to send out an alert about an inbound North Korean missile under circumstances that remain somewhat still unexplained given the procedures that were supposedly in place. For a short period of time at least, this caused thousands of Hawaiians to seek shelter against what they thought was the unthinkable but which ultimately turned out to be a big mistake. Hopefully, whatever lessons have been learned from that mistake are being applied to the system operating these Presidential alerts.

As I stated in my original post on this test, while I understand some of the concerns, and recognize that many of the comments about the President being able to tweet at everyone is mostly meant to be in jest, I think that, on the whole, a system like this does make sense. In practice, it’s really not any different from the Emergency Broadcast System that we’ve all been used to for decades now, and which has frequently been used in local areas to notify television viewers and people listening on the radio of important localized threats such as tornadoes. This system, which is built into pretty much every phone manufactured since 2015, allows users to turn off most alerts, including Amber Alerts and localized weather alerts (although that’s one I would think it would be wise to keep turned on), but keeps so-called “PresidentialAlerts” turned on regardless of any other setting. The only way to avoid receiving such an alert would be if the phone is turned off. Obviously, this sort of alert is meant to be used in cases of extreme national emergency. Hopefully, we’ll never have to find out what that means.

Here’s a copy of the Complaint in the aforementioned lawsuit: