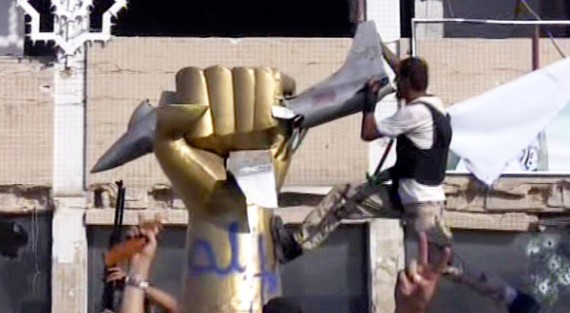 Rebel fighters flooded into Col. Muammar el-Qaddafi’s sprawling compound on Tuesday, overwhelming what remained of its defenses and running pell-mell through the grounds, as the crackle of gunfire and rumble of explosions spread across a confused and wary Libyan capital in spasms of renewed fighting.

Footage broadcast by Al Jazeera showed dozens of rebel fighters on foot and in pickup trucks moving quickly into the Bab al-Aziziya compound, where smoky fires shrouded the landscaped palms and multistory buildings of what the rebels have described as Colonel Qaddafi’s last hideout. Many of the rebels were searching the buildings room to room but there was no immediate sign that Colonel Qaddafi or any of his family members were there.

In what could become a defining image, the footage showed fighters scrambling to topple one of Colonel Qaddafi’s favorite sculptures: a giant fist crushing an American jet fighter. Colonel Qaddafi had installed the sculpture in front of a house on the compound that was bombed on orders of President Reagan in 1986, when Libya was considered a pariah state. The wrecked building became Colonel Qaddafi’s backdrop for major speeches, including his defiant challenge to the rebels at the start of their uprising six months ago.

It was unclear whether rebels had complete control of the compound. Al Jazeera reported sniper fire inside. CNN showed footage of fighters emerging from one building with what it described as medical files of the Qaddafi family.

A spokesman for the Transitional National Council, the rebel governnment based in the eastern city of Benghazi, where the uprising began, said the rebels assumed that Colonel Qaddafi had not left Libya. “We believe that he is either in Tripoli or close to Tripoli,” the spokesman, Guma el-Gamaty, told BBC television. “Sooner or later, he will be found, either alive and arrested – and hopefully that is the best outcome we want – or if he resists he will be killed.”Russian news agencies reported earlier that Colonel Qaddafi had a telephone conversation with the Russian head of the World Chess Federation, Kirsan N. Ilyumzhinov. One of Colonel Qaddafi’s eccentric circle of foreign friends, Mr. Ilyumzhinov quoted Colonel Qaddafi as saying he was alive and well in Tripoli. Colonel Qaddafi’s son Seif al-Islam, who made a surprise appearance at a hotel with foreign journalists to refute reports of his arrest, also boasted that his father was safe in Tripoli.

Finding the Libyan leader could be difficult given the vast network of tunnels that he has apparently built underneath Tripoli and other parts of the country:

Obsessed by his own security, the Libyan dictator oversaw the construction of hundreds of miles of tunnels and bomb proof bunkers that connect many of his compounds and key buildings.

Criss-crossing beneath Tripoli, Gaddafi and his trusted aides were able to move around the city undetected even from the air.

During the Nato bombing raids, Gaddafi was able to hide out in his well-stocked bunkers while maintaining communication with his family and government.

But beyond his warren of personal passages beneath Tripoli is a vast complex of tunnels stretching out under the desert and connecting many of the key towns and cities.

In 1984, concerned about the threat to his regime from an increasingly hostile West, Gaddafi ordered the construction of thousands of miles of what were described as ‘irrigation tunnels’.

The project, which cost a staggering £15 billion was titled the Great Man Made River and promised to bring water from the Saharan aquifer in the south of the country to the major cities of Tripoli and Benghazi.

But built from 75 ton sections of reinforced concrete that are laid as deep as 600ft in places, the 13ft tunnels also provide a handy way of avoiding detection and hostile attack.

US intelligence officials have long suspected that the project, which was completed using European and South Korean engineering skill and labour, had a military as well as a domestic purpose.

Like finding Saddam in Iraq, one gets the impression that a failure to capture or kill Gadhafi could end up undermining a rebel victory.