A Vogue cover model of whom I’d never previously heard and does not conform to my preconceptions of what a Vogue cover model looks like has won a lawsuit against Google over an anonymous former blogger who called her names on the Internet. A Vogue cover girl has won a precedent-setting court battle to unmask an anonymous blogger who called her a “skank” on the internet.

In a case with potentially far-reaching repercussions, Liskula Cohen sought the identity of the blogger who maligned her on the Skanks in NYC blog so that she could sue him or her for defamation.  A Manhattan supreme court judge ruled that she was entitled to the information and ordered Google, which ran the offending blog, to turn it over.

Ms Cohen, a tall, Canadian blonde who has modelled for Giorgio Armani and Versace, went to court after reading the wounding anonymous comments on Google’s Blogger.com.  ”I would have to say the first-place award for ‘Skankiest in NYC’ would have to go to Liskula Gentile Cohen,” the blogger “Anonymous” wrote in one posting. The blog, since removed, ridiculed the former Australian Vogue covergirl as a “40-something” who “may have been hot 10 years ago”, when she was actually 36.

Justice Joan Madden rejected the blogger’s claim that the blogs “serve as a modern-day forum for conveying personal opinions, including invective and ranting”, and should not be treated as factual assertions.

The model was looking forward last night to discovering the identity of the alleged acquaintance who insulted her. “Everybody is waiting to see who this coward is,” Steven Wagner, her lawyer, said.

While I absolutely believe that bloggers should be held just as liable as anyone else for defamation—even if that requires forcing the disclosure of their identity to the alleged victim—it’s hard to see how voicing the opinion that someone is the “skankiest in NYC” even comes close to defamation. There is no factual assertion being made, given that there would seem to be no universal standard of measurement for such a condition.

A second report at the NY Post (via Tom Maguire) however, reveals something that might rise to the level of defamation:

A Manhattan judge ruled yesterday that a blogger can’t hide behind a web of anonymity while flinging the ugly words “skank” and “ho” at somebody online.

The sternly worded ruling orders Google to give up the identity of an anonymous blogger-assailant who inexplicably devoted an entire blog—titled “Skanks in NYC”—to maligning beautiful blond model Liskula Cohen.  [Apparently the view of reporter Laura Italiano, who editorializes throughout. – ed]

Once she learns her attacker’s name—possibly as early as today—the model can serve the anonymous blogger with a defamation lawsuit.

The blog, which was posted through Google’s “Blogger.com” subsidiary last year, had included sexy fashion shots of Cohen with captions using the words “skank,” “ho” and “whoring.”

The thrust of the blog is that [Cohen] is a sexually promiscuous woman,” Manhattan Supreme Court Justice Joan Madden wrote in her decision. That included references to Cohen as “whoring” and “ready to engage in oral sexual activity.”  As such, the international cover girl is entitled to insist in a defamation lawsuit that the blogger’s statements are false and damaging—and to get from Google the blogger’s name she needs in order to do so, the judge ruled.

Cohen’s lawyer, Steven Wagner, said he hopes the decision sends a message to bloggers, Twitterers, and whoever else would use the anonymity of the Internet for cowardly defamations. “The rules for defamation on the Web—for actual reality as well as virtual reality—are the same,” Wagner said. “The Internet is not a free-for-all.”

Well, it pretty much has been for going on two decades now.  But, again, I agree that people should be held liable for their actions on the Web. Indeed, spreading false rumors on the Web is far more damaging than simply stating them in words somewhere, given the much larger audience.

I’m not sure what the rules of discovery are in such cases. Presumably, the blogger isn’t entitled to a fishing expedition through Cohen’s sex life to see whether there is any truth to the descriptors he applied.

One imagines that the burden here is high, though.  The word “whore” has been transformed in the popular culture into a meaning well beyond traditional prostitution.  And I’m not sure that insinuating that an adult engages in oral sex with other adults, especially of the opposite sex, can even still be considered defamatory.

UPDATE:  My wife informs me that the identity of the blogger has already been revealed.  Gawker (Warning: NSFW) has a good roundup, including a link to a new story at NY Post.

The anonymous cyber-bully who harassed and belittled Manhattan model Liskula Cohen with insulting terms like “skank,” “ho” and “old hag” on a mean-spirited blog was a female acquaintance of hers.

The model said she’s still mystified about why the woman went after her so viciously. “I have no idea. She doesn’t have a lot going on and she’s jealous,” she said. “It’s the only logical explanation.”

She “was an irrelevant person” whom she’d bump into at events and restaurants around town, Cohen said. “She was always around.”

Cohen said they exchanged pleasantries when she called her on Tuesday night. Then Cohen confronted her when the woman asked, “How are you?” “I’m sure you know exactly how I am right now,” Cohen told her — and then astonished the backstabber by apologizing to her. She told her, “If I’ve ever done anything to you to actually deserve this, then I’m really very sorry.”

The stammering blogger responded, “We shouldn’t be talking . . . We should talk with the lawyers.” Cohen stopped her in her tracks. “I said, ‘No more lawyers. It’s OK. I said I forgive you. It doesn’t matter anymore,’ ” Cohen told ABC’s “Good Morning America.”

Except that she’s still suing for defamation. 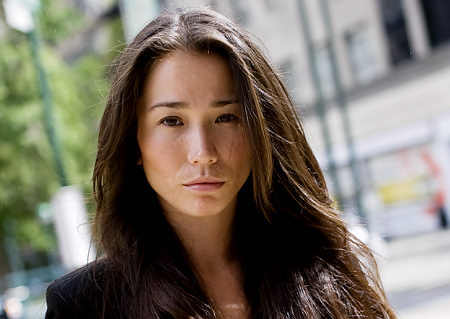