French President Emmanuel Macron made several concessions to the Yellow Vest protesters but it remains to be seen if this will be enough to quell the protests. 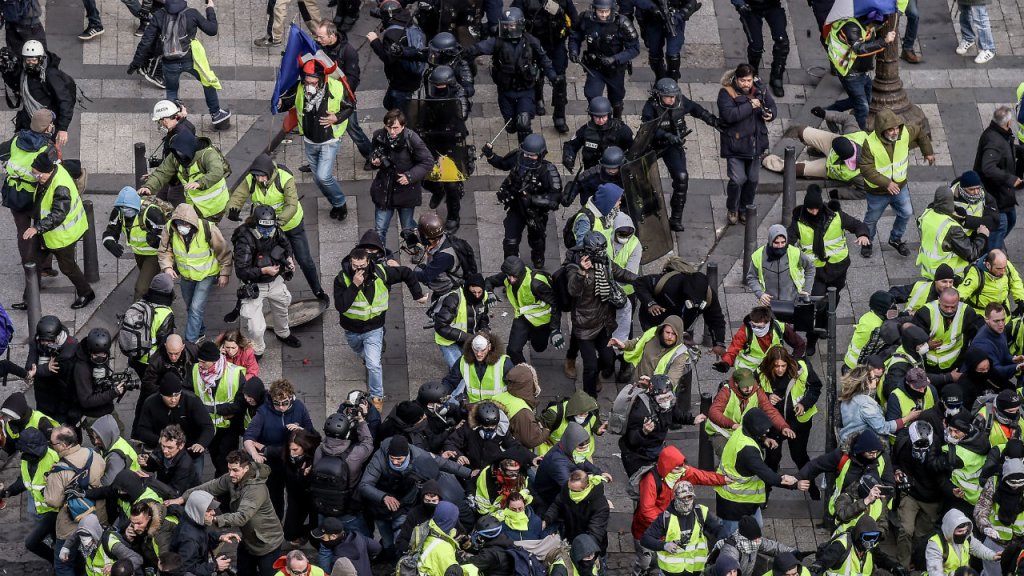 French President Emmanuel Macron addressed the nation on Monday and sought to appease the “yellow jacket” protests that have racked the nation for the past five weeks:

PARIS — Faced with violent protests and calls for his resignation, President Emmanuel Macron of France said Monday that he had heard the anger of the many whose economic suffering has burst into the open in recent weeks and that he would take immediate steps to relieve their hardship.

Mr. Macron’s mea culpa on national television signaled a remarkable step back from his ambitions to reshape France’s economy and become the European Union’s foremost leader. For now, his chief goal is shoring up his own political support in France.

He announced tax cuts and income increases for the struggling middle class and working poor, vowing to raise the pay of workers earning the minimum wage. He promised to listen to the voices of the country, to its small-town mayors and its working people.

“There is anger, anger and indignation that many French share,” he said in 13-minute prerecorded speech from the Elysée, the presidential palace.

Mr. Macron’s words and planned actions framed an attempt by a politician regarded as aloof and imperious to connect with ordinary citizens in Europe’s third-largest economy.

The speech followed a month of turmoil in which a movement known as the Yellow Vests rampaged through Paris and other French cities. The movement, which began as a revolt against a fuel tax increase, has morphed into an angry rebuke of Mr. Macron and his government’s failure to focus on what his critics call France’s forgotten middle class.

Attempting to show that he understood, Mr. Macron acknowledged the anger of “the couple who earn salaries that do not finish the month, and who get up every day early and come home late.” He sympathized with “the single mother, a widow, a divorcée,” whose life is no longer worth living, he said, and “has no more hope.”

Mr. Macron recognized the anger too, he said, of retired people of small means who have “contributed all their lives and often helped both parents and children, and no longer make ends meet.”

And in a rare admission of having fallen short, he said he took responsibility for having not responded more quickly, saying that he realized that people had the impression that he had “other priorities” and was not concerned about their problems.

Mr. Macron said that the details of his relief steps would be announced by Prime Minister Édouard Phillipe in Parliament on Tuesday, but that there would be a supplement of 100 euros, or about $115, to workers earning the monthly minimum wage starting in January; that taxes on overtime pay would be eliminated and that retirees whose earnings are less than 2,000 euros a month, about $2,270, would no longer be asked to pay a recent increase in social security taxes.

Whether Mr. Macron’s actions will ease the deep-seated resentment toward him in France was unclear at best. So were the particulars of his proposals, which could translate into less in people’s pockets than he made it sound.

While some protesters welcomed the president’s announcements as a first gesture, and a few praised him for his contrition, many more criticized what they called “half measures.”

On the dozens of Facebook groups dedicated to the movement that have buzzed over the past month, a majority of Yellow Vests protesters said they felt it was too little, too late. A number expressed dismay that he had not even mentioned the Yellow Vests movement by name.

“There are a lot of forgotten,” one user, Bruno Ceneda, said in the movement’s main group. “And the others only have the crumbs left.”‘

As the day went on yesterday, though, it was clear that Macron’s proposals didn’t exactly resonate with the protesters:

PARIS — The fine print of President Emmanuel Macron’s financial proposal, intended to end protests by France’s middle class and working poor, was still sinking in Tuesday, but many of the protesters were expressing disappointment and calling for new demonstrations this weekend.

The president’s 13-minute speech on Monday evening detailed an increase in the amount minimum wage workers would receive in their pockets each month (100 euros, or $113), an exemption from taxes on overtime pay, and an exemption on certain social security taxes for retirees who earn less than 2,000 euros, or $2,265, a month.

The proposals showed that the president was prepared to move “quickly and forcefully” to respond to the anger of working people who cannot make ends meet, said Édouard Philippe, the prime minister.

But the intended beneficiaries of the changes said they were doubtful about how helpful they would be, and local elected officials said their constituents had mixed views of the president’s plan and his tone.

For the mayor of Plaisir, a town on the far outskirts of Paris, the proposal was a “first step that resembles an immediate band aid, to try to stop this uncontrolled wave,” said Joséphine Kollmannsberger. She watched the speech Monday with 50 local shopkeepers.

“There is real suffering in France, in the provinces there are deep difficulties,” the mayor added, with citizens suffering from low incomes and villages and towns struggling to afford the services they offer.

Although Mr. Macron’s proposals were not insignificant — they will cost the French government about 10 billion euros, or about $11.3 billion, said Bruno Le Maire, the finance minister — they will not touch many of those who have been demonstrating, those who earn more than the minimum wage and so will not benefit from the increase.

And among the lowest earners, many viewed Mr. Macron as deceptive in his description of how much he would help people taking home the minimum wage.

“He made it sound like he was increasing the SMIC,” said Joelle Santos, who works as a janitor in Paris, referring to the minimum wage by its French acronym.

“But he’s not really helping. He’s a banker, he knows what he’s doing. It is not part of the salary, it won’t help when we retire,” she said.

Her disappointment comes from the fine print on the changes Mr. Macron announced in the minimum wage.

Instead of raising the base wage, which would have raised costs for businesses, he accelerated already-planned increases in a government subsidy that low-wage earners can claim.

But the subsidy does not count toward a worker’s monthly salary figure and so is not part of the calculation for unemployment or retirement benefits. Nor are all low-wage earners automatically eligible for the subsidy.

That sense among voters of having been deceived is a problem that has haunted Mr. Macron since his election victory last year, after he had campaigned on promises to make France grow and reduce unemployment. Growth has come slowly in the past year and unemployment, while lower, is still hovering just above 9 percent.

At the same time, public polling is indicating that the protesters may have outlived their welcome with the French public. For five weeks now, the protests have virtually shut down Paris and a handful of other cities as law enforcement struggles to both allow the protesters to voice their opinions while at the same time engaging in property destruction and violence. Additionally, the protests have been having an economic impact in that they have caused businesses to close as a precaution during the height of the Christmas shopping season and led to the cancellation of other holiday-related events such as the Christmas bazaars that are common in many Western European countries. One French pollster, for example, stated that prior to Macron’s address to the nation support for the protests had dropped from the 70 to 80% range into the 60% range. Another poll taken in the wake of the address on Monday suggested that public opinion was still in flux, with the public almost evenly divided on the issue, with roughly 50% saying they sympathized with the protests while the same amount said they wanted the protests to stop. This could suggest that the protests could lose public support rather quickly if they continue now that Macron has conceded several points to the protesters. If that occurs, then Macron may have achieved at least some of its political posts with his concessions. Whether that will make enough of a difference with the groups actually driving the protests, though, remains to be seen.