According to a new survey conducted for the Chicago Council on Global Affairs survey of public opinion on foreign policy (PDF), Americans oppose an attack on Iran:

While nearly two-thirds of Americans see Iran as a threat (down a bit from two years ago), slightly more still want their government to talk to the Iranians. What don’t Americans want? A war with Iran, especially not a unilateral one (my emphasis):

A slim majority (51%) opposes UN authorization of a military strike against Iran’s nuclear energy facilities, with a substantial minority (45%) supporting such action. A far broader majority (70%) opposes a unilateral strike by the United States if Iran continues to enrich uranium but the Security Council does not authorize a military strike.

That means even some of those Americans who think Iran is hellbent on developing weapons—or that Iran already has them—don’t support an attack.

Americans aren’t that keen on the idea of an Israeli attack on Iran’s nuclear program either: 59 percent of respondents to the Chicago Council said the U.S. shouldn’t commit military forces to help Israel in the event that an Israeli initiated-strike touches off a broader conflict. Nearly four-in-ten said the U.S. should jump in.

This actually surprises me somewhat since one would have thought that American antipathy toward Iran would’ve made support for military action more likely. Obviously, ten years of war have made the American public not so eager to fight another one. One interesting takeaway from the poll is that the strategy toward Iran most supported by those surveyed are multilateral and unilateral sanctions, which Romney and the Republicans keep telling us won’t work. 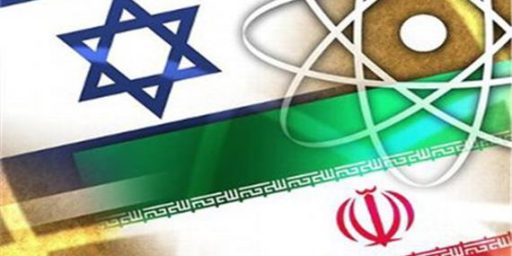 Report: U.S. Convinces Israel To Back Down On Iran, Or Maybe Not