A Soyuz mission sending two men to the International Space Station was forced to abort shortly after launch. Fortunately, the American and Russian on board returned safely to Earth. 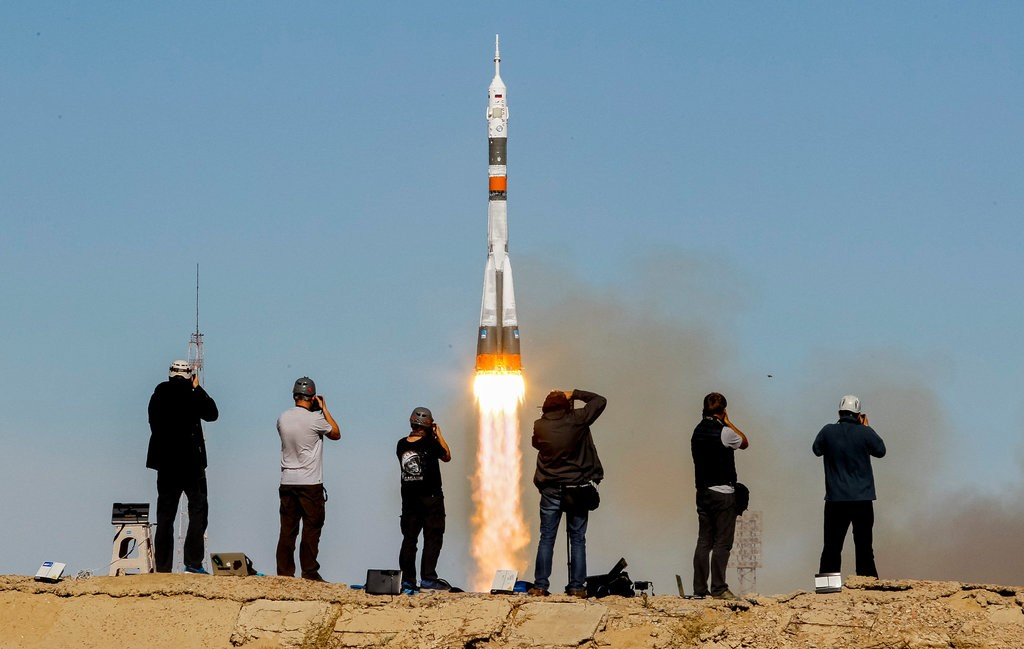 A malfunctioning Russian rocket led to an aborted mission and thankfully successful rescue for Russian and American astronauts headed to the International Space Station this morning:

More than 40 miles above Earth and hurtling toward space faster than a rifle bullet, a rocket carrying an American astronaut, a Russian cosmonaut and hundreds of tons of explosive fuel failed less than two minutes after liftoff on Thursday, forcing the crew to make a harrowing but safe emergency landing.

The capsule parachuted to Earth about 12 to 15 miles outside Zhezqazghan, a small city in central Kazakhstan, and neither of the crew members was injured, both the Russian and American space agencies said.

Russian state TV broadcast pictures of the capsule sitting in the middle of a flat, barren landscape dotted with low shrubs. The two astronauts — Nick Hague of the United States and Aleksei Ovchinin of Russia — walked to a rescue helicopter that whisked them back to the Baikonur Cosmodrome where their ill-fated voyage began.

Soon after, Roscosmos, the Russian space agency, tweeted a picture of the two men sitting and speaking with Dmitri O. Rogozin, the head of the Russian agency.

The first sign of trouble was reported publicly eight minutes after the liftoff of the Russian Soyuz rocket, when NASA tweeted, “There’s been an issue with the booster from today’s launch.”

Eleven minutes later, the agency added, “The crew is returning to Earth in a ballistic descent mode,” meaning that it was falling without propulsion and that its direction was determined only by the craft’s momentum, later braked by a parachute landing.

The agency added that ballistic descent means “a sharper angle of landing compared to normal,” which indicates a threat to the crew’s safety. The angle of the capsule’s descent is normally carefully calibrated so that it does not overheat when plunging back through the Earth’s atmosphere.

A little more than an hour after launch, Mr. Rogozin said on Twitter that the crew had been rescued. “A state commission has been established to investigate the causes” of the failure, he added.

Dmitri S. Peskov, the Kremlin spokesman, told journalists in Moscow: “Thank God the cosmonauts are alive. This is the main thing.”

Jim Bridenstine, the NASA administrator, was present at the launch, which occurred at 4:40 a.m. Eastern Time.

Russia announced that it was suspending missions to the International Space Station until the cause of the failure had been determined. The current three-person crew on the space station would continue working until December, when the next launch was scheduled, the Russian news agency Interfax reported.

According to a Russian space official cited by Interfax, “the emergency occurred 119 seconds into the flight, during the separation of the side boosters of the first stage from the central booster of the second stage.” The second-stage booster rocket shut down.

Here are the Twitter updates that have been posted by NASA and the Russian space agency:

There's been an issue with the booster from today’s launch. Teams have been in contact with the crew. Updates: https://t.co/mzKW5uV4hS

The crew is returning to Earth in a ballistic descent mode. Teams are working to obtain additional information from our Russian partners. Watch live updates: https://t.co/mzKW5uDsTi pic.twitter.com/kWigYS1gU4

The Soyuz capsule has landed back on Earth carrying two crew members. Search and rescue teams are in contact with the crew and are en route to the landing location. Live updates: https://t.co/mzKW5uDsTi pic.twitter.com/G3IuAztH6O

.@NASA astronaut Nick Hague and Russian cosmonaut Alexey Ovchinin are in good condition following today's aborted launch. I’m grateful that everyone is safe. A thorough investigation into the cause of the incident will be conducted. Full statement below: pic.twitter.com/M76yisHaKF

Here’s the video of how things unfolded this morning; (h/t Jazz Shaw)

The Soyuz spacecraft that the Russians use to send Cosmonauts into orbit is essentially the same vehicle that they have used since the late 1970s and 1980s and which the United States has relied upon to get astronauts into orbit since the end of the Space Shuttle program several years ago. Despite its age, and the fact that returning to Earth means landing in the hard Earth rather than in the ocean or via Shuttle as Americans used to, the Soyuz has been a fairly reliable vehicle for getting people to and from the International Space Station. Indeed, there has not been a recorded accident involving a Soyuz craft since the early 1980s. Additionally, the Soyuz craft has proven to be both sturdy and reliable, something that can be seen in the fact that this one essentially was forced to return from the edge between Earth’s atmosphere and space after the failure became apparent.

Notwithstanding all of that, NASA has been working with SpaceX and other companies to develop an independent means of getting men to and from the ISS that doesn’t rely on Russian launch facilities and launch vehicles. That mission has taken on some new energy in recent years given the increase in tensions between the United States and Russia in the wake of the Russian occupation of Crimea and Russian military action in Syria. While those events don’t appear to have impacted the relationship between NASA and the Russian space agency, and the United States continues to pay Russia for the ability to use the Soyuz to send Americans into orbit, the possibility that this relationship could sour is certainly one reason why American experts are eager to get an alternative means to transportation going as soon as possible.

One thing that this reminds us of, of course, is that space travel, even in the form of a launch to the relatively nearby International Space Station, is still far from a routine matter. Every launch and every mission carries with it the risk of failure and tragedy, something we ourselves have seen several times since the Space Age began. In 1967, for example, three of America’s top astronauts died in a fire on the launch pad during a test for what would have been the first manned flight for the Apollo program. Three years later, a mid-mission disaster for Apollo 13 led to a touch-and-go effort to return home to Earth that was thankfully successful. And,of course, most notably there was the Challenger disaster in 1986 and the Columbia disaster in 2003, both of which resulted in the loss of both the spacecraft and all hands on board. Thankfully, things ended more happily today, but it’s not difficult to imagine how things could have turned out differently.

At least for the short term this incident will mean that no new crews will be heading to the ISS until a full review of what happened today can be completed. However, that shouldn’t impact the situation on the ISS too badly. Thanks to SpaceX and its resupply missions, we already have a means to get supplies to the station, and the company and several of its competitors continue to work toward the ability to send a crew to the ISS on SpaceX vehicles, something that could finally enter the final testing phase some time early next year. The quicker that happens, it would seem, the better.