Man Threatens Cops with Lawsuit for Right to Video Tape Them

An Oregon man is threatening to sue the city to determine if “civilians” have the right to video tape police officers on the job while in public. Good for him I say. Here is what happened,

The videotaping incident that netted Tabor a ticket unfolded when Tabor spotted officers Dane Reister and Nicholas Ragona stopping two men on March 25 next to the Portland Art Museum. On the nine-minute video, one of the officers can be heard accusing one man of being a drug dealer and the other a drug buyer. He repeatedly asks one of the men for his ID and to allow himself to be patted down. At one point, the officer -identified by Tabor as Reister -tells the man to back away. And when the man takes a step back, Reister takes two or three steps forward and shoves the man in the chest.

“That bugged me,” said Tabor. “It really looked like intimidation – bully-type stuff.”

After patting the man down, the officers let both men go. Then Reister walks over to Tabor, asks him if the camera was also recording sound, and when Tabor says yes, tells Tabor to hand over the camera.

Tabor began to walk to Central Precinct to file a complaint. The officers pulled up in their patrol car and asked what he was doing and then said they’d meet him in the lobby.

Tabor claims that after waiting about 20 minutes, the officers returned his camera and handed him a ticket. Tabor said the officers told him he was standing too close and making them nervous in what could have been a dangerous situation.

The police usually point to ORS 165.540 which prohibits the recording of convesations between people when those people expect their conversation to be private. There is only one problem for the police, when you are in public your expectations of privacy are seriously diminished.* Further, police officers work in a public capacity not a private one. When a police officer is arresting someone on a public street the expectation of privacy is greatly reduced for both the person being arrested and for the police.

And then there is this,

In 1991, then-police chief Tom Potter issued a training bulletin stating that the public had the right to record video and audio of police arresting suspects in a public place. Woboril, Schmautz and Police Chief Rosie Sizer weren’t aware of the bulletin, but Tabor’s attorney, Haile, dug up it up in his research.

Haile said he wants the bureau to specify that police stops — not just arrests — can be recorded. He also wants the policy put in the bureau’s policy and procedures manual, so it won’t be forgotten.

That “civilians” can videotape police officers while on the job in public is a good idea in that it is another incentive for officers not to abuse their authority. Start pushing someone around and roughing them up and you might find yourself on the evening news, then getting fired, then getting sued. This is a good thing, but I can see why cops wouldn’t like it. It puts some power back in the hands of “civilians”. Cops don’t like this. Funny, considering that that is precisely where power is ultimately supposed to rest in this country. Of the people, by the people and for the people…I guess for cops flunking high school government class is mandantory.

Link via Radley Balko.
_____
*Now, I am not a lawyer, but that is my general understanding of the law.

FILED UNDER: Government, Law and the Courts, US Politics 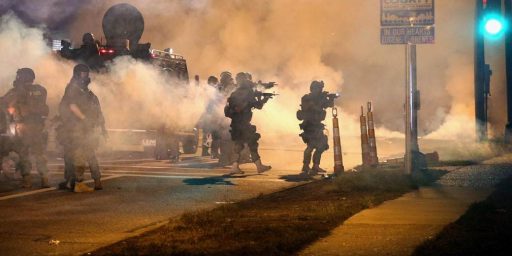 Warnings Of Violence In Ferguson Could Become Self-Fulfilling Prophecy