An Iraqi man was denied the right to board an airplane because he was wearing a t-shirt with the words “We Will Not Be Silent.”

An Iraqi architect says he was not allowed to board a Jet Blue flight at JFK because of the Arabic inscription on his t-shirt.

REPORTER: Raed Jarrar was wearing a T-shirt that read We Will Not Be Silent in Arabic and English, when he was approached by security officers. The officers said the Arabic script was upsetting other passengers, and told Jarrar to either turn the shirt inside out or wear something else. Jarrar protested but finally wore a T-shirt provided by a Jet Blue employee.

JARRAR: I grew up and spent all my life living under authoritarian regimes. and i know that these things happen. But I’m shocked that they happened to me here, in the U.S. Especially that I moved from Iraq because of the war that was waged in Iraq under titles like democracy and freedom.

REPORTER: A spokesman for Jet Blue says the airline is investigating to see if the security officers were with the airline, the Transportation Security Administration or the Port Authority. He also said the airline does not forbid Arabic T-shirts, but that it does take into account the concerns of its passengers.

While one can understand passengers being somewhat nervous about t-shirts bearing defiant messages in Arabic, given the history of defiant Arabs and airplanes, this is certainly an overreaction.

UPDATE: Jim Henley speculates in the comments below that this is THE Raed Jarrar, of the long defunct Where is Raed? blog. He was an Iraqi architect, so it’s quite possible if not probable. The connection escaped me at first, because I knew him only as “Raed.”

UPDATE: Confirmation. This is actually a several day old story.

On a trip back from the Middle East, Iraqi blogger and activist Raed Jarrar was not allowed to board a flight at JFK airport because he was wearing a T-Shirt that said “We will not be silent” in English and Arabic. Airport security forced him to change his T-Shirt saying wearing it was like “going to a bank with a T-Shirt reading ‘I am a robber.'”

The link contains a transcript of a chat between Jarrar and Amy Goodman. Jarrar is now Iraqi Project Director for Global Exchange and runs the less high profile Raed in the Middle blog, where he posted an account of the incident on August 10th. 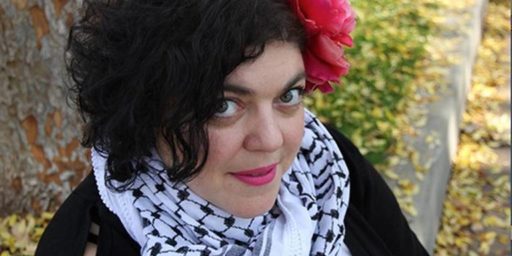