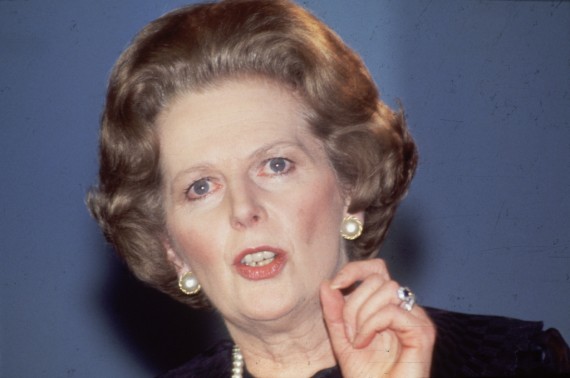 Former British Prime Minister Margaret Thatcher, who served as Great Britain’s Head of Government for 11 years and shaped the 1980s alongside men like Ronald Reagan and Pope John Paul II, has died at the age of 87:

Former British prime minister Margaret Thatcher, the grocer’s daughter whose overpowering personality, bruising political style and free-market views transformed Britain and transfixed America through the 1980s, died Monday after a stroke, her spokesman said in a statement. She was 87.

The first woman to lead a major Western power, Mrs. Thatcher served 111 / 2 uninterrupted years in office before stepping down Nov. 28, 1990, making her the longest-serving British prime minister of the 20th century.

Infuriated by Britain’s image as the “sick old man of Europe,” she set out to dismantle Britain’s cradle-to-grave welfare state, selling off scores of massive state-owned industries, crushing the power of organized labor and cutting government spending with the purpose of liberating the nation from what she called a “culture of dependency.”

On the world stage, she collaborated closely with her friend Ronald Reagan to modernize Europe’s anti-Soviet nuclear shield by deploying cruise and Pershing II missiles in Britain, a costly and controversial enterprise that some analysts would later say contributed to the breakup of the Soviet Union. Mrs. Thatcher then joined Reagan’s successor, George H.W. Bush, in repelling Saddam Hussein’s invasion of Kuwait, counseling Bush not to go “wobbly” on her.

She fought her own war as well, dispatching an armada to retake by force a colonial outpost off South America — the Falkland Islands — after it was invaded by Argentina in 1982. At the same time, she negotiated the end of Britain’s lease over another colonial relic, Hong Kong.

During her career, Mrs. Thatcher was frequently at war with consensus, which she disdained as the abandonment of “all beliefs, principles, values and policies.” At a low point in her popularity ratings, facing a clamor for change from her own party members, she gave a defiant response: “You turn if you want to,” she declared. “This lady’s not for turning.”

While unapologetically advancing what she considered the Victorian values that made Britain great, Mrs. Thatcher thoroughly modernized British politics, deploying ad agencies and large sums of money to advance her party’s standing. “The Iron Lady,” as she was dubbed, was credited with converting a spent Conservative Party from an old boys club into an electoral powerhouse identified with middle-class strivers, investors and entrepreneurs. No one denied her political genius. Future prime minister Tony Blair eventually copied her methods to remake the rival Labor Party.

She was, wrote Conservative Party contemporary Chris Patten, “a political bruiser who understood the importance of an element of fear in political leadership. . . . While denouncing the notion that politics was the art of the possible, that is exactly what she practiced, albeit skillfully and bravely redefining the limits of political possibility.”

When Mrs. Thatcher arrived at the House of Commons, the Conservatives were in power but philosophically divided. The core conflict within the party, as Mrs. Thatcher saw it, was between people such as Prime Minister Harold Macmillan, who had come to terms with socialism as part of a “postwar settlement,” and those such as Mrs. Thatcher, who had not.

She relied on ferocious preparation, study and attention to detail to get noticed by party leaders. In October 1961, they plucked her from the backbenches of the House of Commons and made her parliamentary secretary in the Ministry of Pensions, the lowest rung on the ladder to leadership. In 1970, after a Conservative general election victory, she ascended to the Ministry of Education.

Here was born the image of “Thatcher the uncaring” that would follow her throughout her career. Amid cuts in public spending prompted by the economic downturn of the 1970s, Mrs. Thatcher was ordered by the Treasury to eliminate, among other things, free milk in schools. “Thatcher, Thatcher, Milk Snatcher,” cried the tabloids.

“It was the incident that made her a truly famous politician,” wrote biographer Hugo Young. “Somehow it struck a deeper chord. It was a piece of seemingly gratuitous deprivation that conformed with the image of severity and adamant righteousness which was beginning to become Mrs. Thatcher’s stock-in-trade.”

Mrs. Thatcher developed a close intellectual relationship with Keith Joseph, a wealthy Conservative MP and intellectual who in 1974 challenged former Prime Minister Heath for party leadership. Mrs. Thatcher was Joseph’s campaign manager. He proved a clumsy campaigner and dropped out, leaving Mrs. Thatcher to carry on in his place. On a second ballot Mrs. Thatcher became Britain’s first female leader of the opposition. To many Tories, she was a placeholder, awaiting a suitable male insider as choice for party leader and possibly prime minister.

The Labor government that came to office after the 1974 election oversaw a long period of crippling inflation, strikes and disaffection that came to be called Britain’s “winter of discontent.” Mrs. Thatcher bided her time, then, on May 4, 1979, took advantage of public dissatisfaction to lead the Conservatives to a general election victory. She took up residence in No. 10 Downing Street.

The first years of her administration went badly. Her government’s attempt to tame inflation by boosting interest rates and sales taxes produced even higher inflation and unemployment. The Irish Republican Army staged dramatic acts of terrorism, killing, among others, the war hero Lord Mountbatten and dozens of British soldiers and engaging in fatal hunger strikes that served to highlight the government’s inability to end the sectarian troubles of Northern Ireland.

In 1984, Mrs. Thatcher was nearly a victim of the IRA herself — a bomb that the group planted devastated a Brighton hotel where she was staying during a party conference, killing five people and injuring 34. She emerged unhurt and went on to give a rousing speech of denunciation.

At other times, she quarreled with cabinet members, frustrated that she had not felt politically able to install true-blue Thatcherites in most jobs, politicians whom she would come to call “one of us.” In December 1981, satisfaction with her leadership reached a new low, 25 percent, in public opinion polls.

When Mrs. Thatcher took office, Jimmy Carter was president of the United States. Although the two had a polite relationship, she gushed over Ronald Reagan, who defeated Carter in the 1980 election. “I knew that I was talking to someone who instinctively felt and thought as I did,” she wrote, “not just about policies but about a philosophy of government, a view of human nature.”

Mrs. Thatcher also held to the long-standing British view that a close relationship with the United States was crucial strategically in the Cold War with the Soviet Union.

Over considerable domestic opposition, she collaborated with Reagan in deploying U.S. cruise and Pershing II missiles. The Soviets could not counter that move, which, in the view of some analysts, advanced later negotiations for the Intermediate-Range Nuclear Forces treaty of 1987.

“All over Europe the peace marchers demonstrated to prevent Western missiles from being installed for their defense,” Reagan wrote in 1989 article in the National Review, “but they were silent about the Soviet missiles targeted against them! Again, in the face of these demonstrations, Margaret never wavered.”

She befriended Mikhail Gorbachev even before he became Soviet leader, believing she had found someone with whom she could “do business,” and later served as an intermediary between Reagan and Gorbachev.

Love her or hate her, there was no denying that Thatcher was among the most influential political leaders of the 20th Century, among Britain’s greatest Prime Ministers and, along with Reagan and Pope John Paul II, part of an informal alliance that helped bring about the end of the Cold War and the liberation of Eastern Europe. She will be missed. 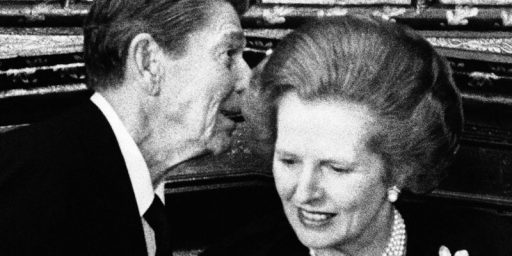