Slate offers a ray of hope for Republicans: “Of 20 new statewide polls, 15 show a shift in McCain’s direction.”

Unfortunately, that movement is coming against a  pretty hard basis.  Their Electoral College map, derived from Pollster.com’s but represented in a more encouraging way for McCain supporters, looks like this: It wouldn’t shock me at all if McCain took every single tossup state; they are, after all, states that Bush took in 2004.  If that happens, McCain adds 85 to his safe 129, bringing him to 214.  And, if he’s getting all the tossups, go ahead and throw in the 13 GOP leaning states to bring him to 247.   I’m not saying that’s going to happen — or even that it’s likely — but it’s not implausible.

That’s still 18 behind the 264 “safe Democratic” states.   The magic number is 270.   So, basically, McCain needs not only all the Republican-leaning states, all the toss-up states, but almost all of the Democrat-leaning states, too.

Give him Virginia’s 13, since that’s the most likely pickup culturally and historically.  That takes him to 260.  Close!   He needs only another 9 to tie and 10 to win!

Neither Colorado nor Nevada would do it, although both together would.  If he can close the 6.3 gap in Ohio, though, he’d get their 20 votes.  That takes him to 280!  A comfortable win.

So . . . for McCain to pull this off, all he needs to do is hold on to every state that’s leaning Republican, pick off tossups Montana, North Dakota, Missouri, Indiana, North Carolina, Georgia, and Florida but also pick up Democratic leaning Virginia and Ohio.  And do it in two days against a candidate with a 10-to-1 money advantage in an anti-Republican environment in which a dozen or so prominent Republicans have endorsed the other guy.

Hey, it could happen! After all, the Giants beat the Buccaneers, Cowboys, and Packers on the road and then beat the undefeated Patriots to win the Super Bowl.

I wouldn’t bet on it, though.

UPDATE:  Commenters point out that I misadded in the third paragraph, thus screwing up the math the rest of the way by 20 points in McCain’s favor.  So, it’s even more stark than the calculation above suggests.  McCain needs not only all the states above but either Pennsylvania or Colorado and Nevada.

Is the Race Narrowing? 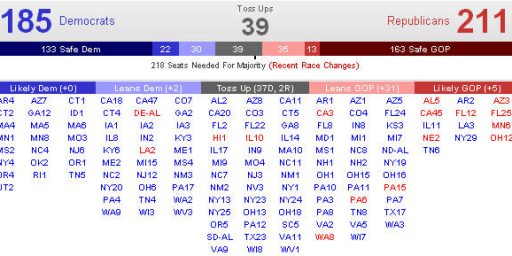 Democratic ‘Safe’ Seats Not So Safe