Meaningless Headline Of The Weekend: Obama Goes To Church

Believe it or not, this was the big news yesterday morning among the chattering classes:

WASHINGTON – President Barack Obama and his family attended an hourlong service Sunday morning at a church just across the street from the White House.

Accompanied by his wife, Michelle, and their daughters, Malia and Sasha, Obama strolled across Lafayette Square to attend St. John’s Church. Sasha held her father’s hand as they crossed the park.

Obama has attended the pale yellow Episcopal church three times previously, as well as other churches in the nation’s capital. The Obama family hasn’t settled on a new permanent congregation since coming to Washington.

A pew nine rows back from the altar at St. John’s carries a small brass plaque designating it as “The President’s Pew.” Church history claims that every president since the nation’s fourth chief executive, James Madison, has visited.

Of course, the Associated Press wasn’t quite as mind numbingly stupid as the New York Daily News, which gave us this headline: 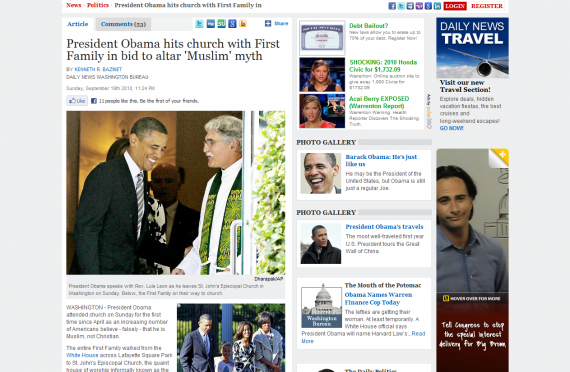 How about this for an idea —- who the heck cares if the President goes to church.