Michele Bachmann: If We Don’t Completely Support Israel, God Will Curse Us 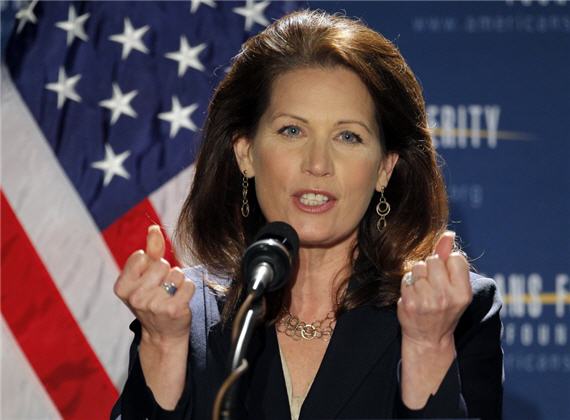 At a Republican Jewish Coalition event in Los Angeles last week, Rep. Michele Bachmann offered a candid view of her positions on Israel: Support for Israel is handed down by God and if the United States pulls back its support, America will cease to exist.

Here’s a transcript of some of her remarks at the RJC event:

I am convinced in my heart and in my mind that if the United States fails to stand with Israel, that is the end of the United States . . . [W]e have to show that we are inextricably entwined, that as a nation we have been blessed because of our relationship with Israel, and if we reject Israel, then there is a curse that comes into play. And my husband and I are both Christians, and we believe very strongly the verse from Genesis [Genesis 12:3], we believe very strongly that nations also receive blessings as they bless Israel. It is a strong and beautiful principle.

Right now in my own private Bible time, I am working through Isaiah . . . and there is continually a coming back to what God gave to Israel initially, which was the Torah and the Ten Commandments, and I have a wonderful quote from John Adams that if you will indulge me [while I find it] . . . [from his February 16, 1809 letter to François Adriaan van der Kemp]:

I will insist that the Hebrews have done more to civilize men than any other nation. If I were an atheist, and believed in blind eternal fate, I should still believe that fate had ordained the Jews to be the most essential instrument for civilizing the nations. If I were an atheist of the other sect, who believe or pretend to believe that all is ordered by chance, I should believe that chance had ordered the Jews to preserve and propagate to all mankind the doctrine of a supreme, intelligent, wise, almighty sovereign of the universe, which I believe to be the great essential principle of all morality, and consequently of all civilization.

. . . So that is a very long way to answer your question, but I believe that an explicit statement from us about our support for Israel as tied to American security, we would do well to do that.

Leaving aside the question of whether it would be a good idea to give any more political power to a person who apparently makes her foreign policy decisions based on religion rather than the facts on the ground and what might actually be in America’s national interest, I’ve really got to wonder if the author of this verse:

The LORD said to Abram: “Go forth from the land of your kinsfolk and from your father’s house to a land that I will show you. I will make of you a great nation, and I will bless you; I will make your name great, so that you will be a blessing. I will bless those who bless you and curse those who curse you. All the communities of the earth shall find blessing in you.

really meant to say Bibi Netanyahu, right or wrong. Somehow, I think not.