A Reuters political blogger has set tongues wagging about the possibility another First Lady might run for the U.S. Senate. 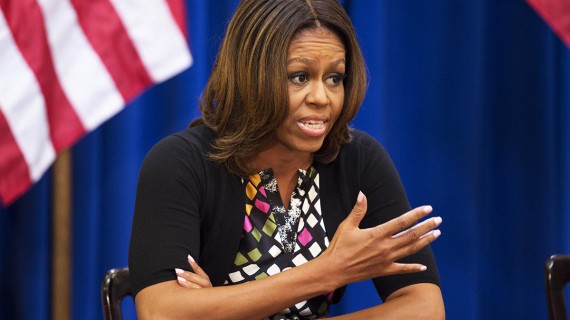 If you believe the media reports, people are speculating about the idea of Michelle Obama running for the Senate in 2016 when Republican Mark Kirk is up for re-election:

She’s wading uncharacteristically deep into the Washington political mud pit to defend her school lunch program against Republicans, assailing them last Tuesday for opting to “play politics with our kids’ health.” She struck a similar tone in a New York Timesop-ed two days later, accusing Republicans of trying to “override science” and suggesting they join parents and “put our children’s interests first.”

So what’s with the bolder profile?

Sure,  Obama cares strongly about the things she is doing. That she does care in fact begs another question: Is caring all that’s going on here? Does she have political ambitions that would allow her to pursue an agenda while working to cement her husband’s legacy?

Speculation about a possible political future for Michelle Obama has naturally centered on the White House. But that’s the wrong place — at least for now.

Illinois has a Republican senator, Mark Kirk, and he is up for reelection in 2016. He’ll be formidable, particularly given his brave recovery from a stroke. But Illinois is a heavily Democratic state, and the race could be close.

No Illinois Democratic candidate would bring the star power and nationwide fundraising capacity that Obama would.

She has proven herself a superb speaker on behalf of her pet projects and is now a veteran campaigner for her husband. She’s also remained highly popular — even as the president’s ratings have plummeted.

She could represent the Democrats’ best chance to pick up a desperately needed — and winnable — seat. A December 2012 Public Policy Polling survey put her ahead of Kirk, 51 percent to 40 percent. Democratic leaders’ pressure on her to run  might get intense.

But the most acute pressure could come from within. Anyone who has listened to her speeches, particularly on the campaign trail, understands that she is a dedicated liberal, who believes unreservedly in the power of government to transform lives.

Obama views the battle between Republicans and Democrats as a struggle for the soul of the nation.

“Who are we?” she repeatedly asked while campaigning in 2012. She said the election result would affect the country “for decades.”

Who we are, in Obama’s view, is a nation in which people help each other through the agency of the government. “Will we honor that fundamental belief,” she asked, “that we’re all better off when we work together?”

Can someone who views politics as an historic contest of ideas resist a unique chance to seize an available Senate seat?

A political blogger with NBC’s Chicago affiliate stirs the pot a little more, and I’ve seen this story get some legs on the right from the usual suspects. In the end, though, it strikes me as mostly just mindless speculation.

When Hillary Clinton spent the last year of her husband’s Presidency running for the New York Senate seat vacated by the retirement of Daniel Patrick Moynihan, nobody was really surprised. As always, it was kind of a shock at first when someone who had never run for office before in their life dived into a high profile Senate race, but it was not very surprising that Hillary Rodham Clinton was the person who had done it. Throughout her time is First Lady, Clinton had been far more politically active than most of her recent predecessors to the point where she became the point person for the signature piece of legislature of the President’s first two years in office. Before that, she was heavily involved in her husband’s campaign for President, and in his political career in Arkansas. It wasn’t too hard to figure out that she had political ambitions of her own, and the speculation about her running for office after President Clinton left office started well before 2000. When Moynihan announced he wasn’t running for re-election, the idea of Clinton coming to New York to run for the seat in the same manner that Robert F. Kennedy had in 1964 made perfect sense.

We can’t really say the same thing about Michelle Obama. Unlike Hillary, she’s never really given any evidence of having her own political ambitions. Several reports have indicated that she was initially opposed to the idea of President Obama running for President to begin with, being well aware of what it would mean for her and the family’s privacy and ability to live anything resembling a normal life. While she has been active as First Lady on issues such as nutrition and issues involving veterans, it hasn’ t been in the same overtly political way that Clinton was involved during her time in the East Wing. Given that, it seems unlikely that Michelle Obama would be as eager to throw her own hat into the ring in Illinois. Add into that the efforts Mrs. Obama has made to maintain some kind of “normal” childhood for Malia and Sasha, both of whom will be teenagers when President Obama leaves office. Finally, there’s the fact that we’re not even sure that the Obama’s will be living in Chicago after 2016. They still own their home there, of course, but recent speculation has suggested that we’re more likely to see President Obama strolling Central Park than Grant Park in 2017.

Given all of this, this speculation about Michelle Obama running for Senate seems to be mostly just that to me. At the same time, though, it’s likely to drive some of the President’s harshest critics, who seem to hate his wife even more, just batty. And there’s definitely some entertainment value in that.