Military Leadership Too White and Male?

The top ranks of the military are whiter and decidedly more male than the country as a whole. Should that change? 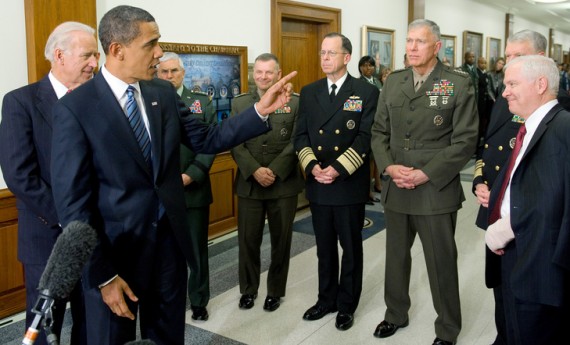 The top ranks of the military are whiter and decidedly more male than the country as a whole. Should that change?

The U.S. military is too white and too male at the top and needs to change recruiting and promotion policies and lift its ban on women in combat, an independent report for Congress said Monday.

Seventy-seven percent of senior officers in the active-duty military are white, while only 8 percent are black, 5 percent are Hispanic and 16 percent are women, the report by an independent panel said, quoting data from September 2008.

One barrier that keeps women from the highest ranks is their inability to serve in combat units. Promotion and job opportunities have favored those with battlefield leadership credentials.

The report ordered by Congress in 2009 calls for greater diversity in the military’s leadership so it will better reflect the racial, ethnic and gender mix in the armed forces and in American society.

Efforts over the years to develop a more equal opportunity military have increased the number of women and racial and ethnic minorities in the ranks of leadership. But, the report said, “despite undeniable successes … the armed forces have not yet succeeded in developing a continuing stream of leaders who are as diverse as the nation they serve.”

But the military doesn’t exist as a job corps; it’s there to fight our nation’s wars and to deter conflict by sheer readiness. Nor is the racial disparity particularly high. Indeed, the top ranks of the armed forces are much more racially and ethnically diverse than those of the Fortune 500. A college degree is an entry level requirement for commissioning (with rare exceptions) and whites are much more likely to have crossed that hurdle, for a variety of factors.

Gender equality, on the other hand, is sorely lacking. But, traditionally, we’ve excluded women from the most dangerous–some would say the most military–career fields.

Among recommendations is that the military eliminate policies that exclude women from combat units, phasing in additional career fields and units that they can be assigned to as long as they are qualified. A 1994 combat exclusion policy bans women from being assigned to ground combat units below the brigade level even though women have for years served in combat situations.

“If you look at today’s battlefield in Iraq and Afghanistan, it’s not like it was in the Cold War, when we had a defined battlefield,” retired Air Force Gen. Lester L. Lyles, the commission’s chairman, said in an interview. “Women serve — and they lead — military security, military police units, air defense units, intelligence units, all of which have to be right there with combat veterans in order to do the job appropriately.”

Because they are technically attached to, but not assigned to, combat units, they don’t get credit for being in combat arms, something important for promotion to the most senior ranks.

If that’s an accurate description of the report–which I have not yet read–it’s a pretty silly argument. The point isn’t “credit” for being in combat arms but the relevant experience. Senior leaders coordinate the combined arms team and those in the combat support and, especially, combat service support specialties simply don’t do that. It would be strange, indeed, to have an airborne division commanded by an officer who came up the ranks in the Finance Corps.

Stretching the definition of diversity, the report also said the military must harness people with a greater range of skills and backgrounds in, for instance, cyber systems, languages and cultural knowledge to be able to operate in an era of new threats and to collaborate with international partners and others.

Again, I haven’t read the report. But this is not only right it has rather broad implications. The military currently has a one-size-fits-all policy for recruiting, initial entry training, physical fitness and appearance, and so forth. Those standards are based on the need for a fit fighting force. But we’re currently excluding the vast majority of high school and college graduates from military service with these standards. To recruit and retain a large number of people with technical and language skills might very well require relaxing those standards.