Armed forces recruiting is at its highest levels in the all-volunteer era, Ann Scott Tyson reports for WaPo.

For the first time in more than 35 years, the U.S. military has met all of its annual recruiting goals, as hundreds of thousands of young people have enlisted despite the near-certainty that they will go to war.

The Pentagon, which made the announcement Tuesday, said the economic downturn and rising joblessness, as well as bonuses and other factors, had led more qualified youths to enlist.

The military has not seen such across-the-board successes since the all-volunteer force was established in 1973, after Congress ended the draft following the Vietnam War. In recent years, the military has often fallen short of some of its recruiting targets. The Army, in particular, has struggled to fill its ranks, admitting more high school dropouts, overweight youths and even felons.

This opening is misleading, giving the impression that the Army has mostly struggled with recruiting over the last 36 years. It hasn’t. Recruiting naturally rises and falls in opposite cycles with the civilian economy and the combination of easy availability of jobs in the private sector and the near-certainty of deployment to an unpopular war made it difficult from roughly 2004 to 2008. The decline in casualties in Iraq combined with the economic slowdown has reversed that trend.

We’ve had numerous periods where recruiting has been pretty easy. So, if this is actually the first time we’ve reached all our goals across-the-board, it’s quite likely a technicality. Maybe we’ve previously fallen short a few people in one of 500 recruiting categories. Perhaps we’ve got fewer goal categories now. Or maybe our goals are in perfect harmony with the incentives for the first time ever. (I suspect we’ve not quite raised our high school graduation, weight, and drug standards to the levels they were during our most recent flush period.)

Regardless, the big takeaway is that all-volunteer has survived its first truly big test.

The wars in Afghanistan and Iraq are considered by experts to be an unprecedented test of the volunteer military’s resilience. Its ability to bring fresh recruits into the force is critical not only to increasing the overall size of the Army and Marine Corps, but to ensuring that additional units are available to rotate into conflict zones. Some Army units sent overseas recently have been deployed at less than full strength.

The military is suffering “strains that are tragic in personal lives, but institutionally the ground forces have held together and are not broken. They are even recovering a little bit as we speak,” said Michael O’Hanlon, a senior fellow at the Brookings Institution. Still, it is difficult to predict how much stress the volunteer military can take as it navigates uncharted waters, experts said. “There is no way to tell at what point the Army will break in the sense of mass desertion, or people unwilling to stay in, or not meeting recruiting quotas,” O’Hanlon said.

That’s because the idea that the Army personnel system will suffer calamity if pushed hard enough, long enough is a non-falsifiable hypothesis. The fact of the matter, though, is that we’ve managed to slog on through some pretty difficult periods for sustained periods without it happen.

It is indeed surprising. During the 1990s, I took it as a given that the Reserve and National Guard would not stand up to the heavy rotations they were suddenly being subjected to. After all, it was essentially free money for decades. Why, joining the National Guard was essentially a Get Out of Vietnam Free card. That has changed radically in recent years and, shockingly, the system stood up. Indeed, most studies I’ve seen show retention is actually higher in the units that got deployed to war than in those who stayed home.

Partly, of course, this is a function of the military — especially the Army — adjusting standards, bonuses, and the like according to the recruiting economy. Mostly, though, it’s because the Services, especially the Marines and Army, do a tremendous job of institutionalizing service. While people of course get tired of constant rotations to Iraq and Afghanistan and the strain that puts on their family, most nonetheless see it as important work and take considerable pride in having undertaken it.
ssss 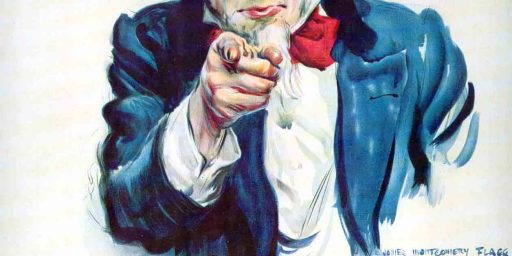