Mitt Romney Goes To Trump’s Right On Immigration And DACA 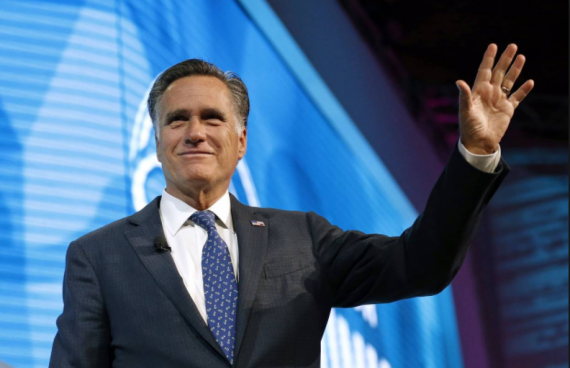 During the 2012 campaign for President, Mitt Romney was noted for being out of step with many of his fellow Republicans on the issue of immigration, and certainly not in line with the immigration hardliners that were already starting to take control of the immigration agenda inside the Republican Party. While he did campaign against Texas Governor Rick Perry based on Perry’s own position on immigration-related issues, and several laws that he supported while Governor of Texas such as granting in-state tuition status to students who were brought to the United States illegally, he was not nearly as far to the right on immigration as many of his fellow Republicans. Prior to running for President, for example, Romney said that he favored immigration reform that included a path to citizenship for illegal immigrants. During the 2012 campaign, Romney said that he would not revoke the DACA program that President Obama had implemented earlier that year and that he would push for an immigration plan that would provide more permanent relief for the program’s beneficiaries. For that, and several other reasons, it’s somewhat surprising to see him staking out an immigration position that is to the right of President Trump and many Republicans in Congress:

Mitt Romney, the former Massachusetts governor who has launched a bid to represent Utah in the U.S. Senate, said he’s “more of a hawk on immigration” than President Donald Trump, arguing that the young undocumented immigrants protected under an Obama-era initiative should not be “allowed to stay in the country legally.”

Romney, who ran for the presidency in 2012 but was defeated by former President Barack Obama, touted his conservative credentials during an event on Monday in Provo, Utah, according to local media.

Romney added that his Republican bona fides extended to the ongoing debate over immigration, citing his opposition to the Deferred Action for Childhood Arrivals program rescinded by Trump last year.

“I’m also more of a hawk on immigration than even the president,” Romney said, according to The Daily Herald. “My view was these DACA kids shouldn’t all be allowed to stay in the country legally.”

Trump announced in September he was ending the Obama-era immigration initiative that provided work permits and some protection from deportation to people in the U.S. who entered illegally as children.

The Daily Herald, a local newspaper in Utah has more:

Romney went so far as to say he’s more conservative on certain issues than President Trump.

“For instance, I’m a deficit hawk,” Romney said. “That makes me more conservative than a lot of Republicans and a lot of Democrats. I’m also more of a hawk on immigration than even the president. My view was these DACA kids shouldn’t all be allowed to stay in the country legally.”

Trump had announced an end to the DACA program in 2017, which protects some young undocumented immigrants who came to the U.S. as children from deportation. However, in an attempt to make a deal with Democrats on the issue, Trump in February presented a plan that included a pathway to citizenship for 1.8 million DACA recipients but was rejected by Democrats because of other changes to immigration included in the proposal. The omnibus bill signed by Trump on Friday did not include DACA.

Romney said he is against giving legal residence to those 1.8 million people.

“That was not my posture,” Romney said. “So I was more conservative than others in my party. Now I will accept the president’s view on this, but for me, I draw the line and say, those who’ve come illegally should not be given a special path to citizenship.”

Romney said he believes DACA recipients “need to do more” to justify permanent residency, such as attending community college, getting a degree, serving in the military or serving in needed occupations like teaching.

As Tara Golshan notes at Vox, it’s somewhat odd to see Romney staking out such a conservative position given the state that he’s campaigning in. While Utah is a deeply Republican state and that voters there are far more conservative than other parts of the country on many issues, this doesn’t necessarily include immigration issues. Thanks in large part to the influence of the Church of Latter Day Saints (a/k/a Mormons), Utahans are generally less conservative on that issue than Republicans as a whole. For example, while polling in the Beehive State has shown that a majority of Utahns support the idea of deporting undocumented immigrants who have criminal records, that same polling also shows them supporting more liberal attitudes toward immigration in other respects. Additionally, as has been the case with most national polling, a large majority of Utahans oppose the idea of deporting DACA beneficiaries. In the poll that found this, even a majority of people who described themselves as “very conservative” supported the idea of allowing DACA beneficiaries to remain in the United States. Many of the respondents who agreed to be interviewed cited teachings of the LDS Church as one of the main reasons they supported such seemingly liberal positions on immigration. In addition to this, the LDS Church has long advocated for immigration reform and the rights of immigrants and most of the state’s top political leaders have pushed for immigration reform that would accomplish that goal. In other words, there really doesn’t appear to be any political reason for Romney to establish his conservative bona fides by taking a position that many of his fellow Utahans don’t support.

It’s possible, I guess, that Romney and his advisers believe he needs to establish his conservatism given the fact that, since the 2012 election, he’s often been attacked by Republicans who claim he lost because he wasn’t conservative enough and that conservative voters staying home is one of the reasons he ended up losing the election. There is, of course, very little evidence to support that argument, but whether it’s true or not would hardly seem to matter. As I’ve noted before Romney is incredibly popular in Utah both among voters generally and inside the state’s Republican Party. He’s received the endorsement of basically every prominent Republican politician in the state, including the state’s popular Governor and Orrin Hatch, who he is seeking to replace and who remains extremely popular in his home state. Finally, while there are other candidates in the race for the Republican nomination, Romney faces at best token opposition in the primary and recent polling shows him with a massive lead over the likely Democratic nominee.

In other words, Romney doesn’t need to stake out a position this far to the right. Why he’s doing it is entirely unclear.