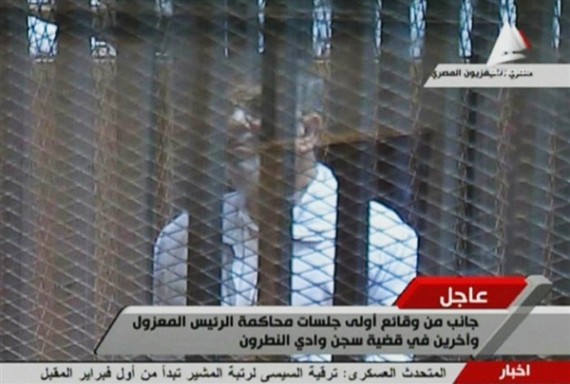 Nearly seven months after being deposed in a military coup, former Egyptian President Mohammed Morsi went on trial today on charges related to actions he took while in office:

CAIRO — Egypt’s military-backed government put the deposed President Mohamed Morsi in a specially designed glass cell as he appeared in a court in Cairo on Tuesday, only his second public appearance since his ouster last July.

The soundproof cage, previously unheard-of in Egyptian courts, demonstrated the extraordinary measures that the new government is using to silence Mr. Morsi, who stole the spotlight by disrupting the first session of his trial in November. Appearing then in a dark business suit instead of the usual white prison jumpsuit, he seized the moment to insist noisily that he was the fairly elected president and the victim of an illegal coup.

Egyptian state television canceled plans to broadcast the session shortly before it began. It displayed only short clips of Mr. Morsi in the cage, this time wearing the customary white jumpsuit, and another glass cage holding about 20 fellow defendants, apparently separated to prevent communication between them. No other news organization was allowed to report from inside the court during the hearing.

When a microphone was briefly switched on in Mr. Morsi’s cage so that he could acknowledge his presence, he declared, according to a journalist who was present: “I have been absent from the world since the fourth of July and haven’t met anybody from my family or my defense. I’m the legitimate president of Egypt.”

The presiding judge shot back: “I am the president of Egypt’s criminal court!”

The microphone in the cage was quickly turned off.

It almost doesn’t matter what Morsi is charged with, because it seems eminently clear that what we’re looking at here is a classic show trial here, just like the ones that we saw during the Mubarak years and, indeed, not unlike the trial of Mubarak himself that took place in the two years after the coup. The verdict is already pre-determined, and the fact that Morsi is being kept in a glass booth shows just how much of a farce the entire process actually is. As I’ve said repeatedly, there was much to criticize about the course that Morsi was taking during his first year in office but a military coup and a return to the Nassar/Sadat/Mubarak era isn’t exactly what Egypt needs for a stable, prosperous, and peaceful future.