More on the Increasing Cost of College Tuitions

Freddie deBoer at Balloon Juice has a nice essay on this subject that looks at two key components of cost inflation in higher ed:  rises in administrative costs and physical expansion.  He points to the following via links and references in his piece.

In regards to administrative costs, note the following from the executive summary of a Goldwater Institute study (Administrative Bloat at American Universities: The Real Reason for High Costs in Higher Education):

As Benjamin Ginsburg explains in The Fall of the Faculty: The Rise of the Administrative University (Oxford UP, 2011), the ranks of administrators and staff have grown much faster than the faculty – 85% for administrators and 240% for staff, compared with 51% growth in the number of faculty between 1975 and 2005.

In regards to buildings, deBoer makes some salient points:

those are the wages of the neoliberal insistence that only market mechanisms are worthy: when you insist that education should just be another product to be marketed and bought, you get what teenagers think is cool rather than what is best for their education or for society.

In other words:  what do we expect 18 year-olds to be attracted to?  Libraries and faculty or dining halls, dorms and gyms?

This is not all of the picture, but are factors worth considering when one attempts to evaluate the situation. 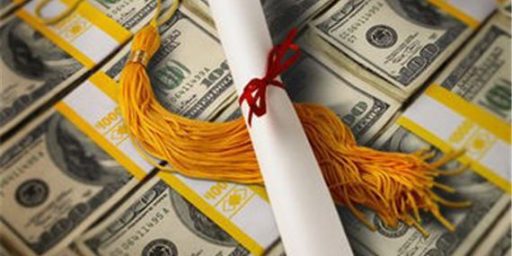