Will the trial of Hosni Mubarak actually change anything? 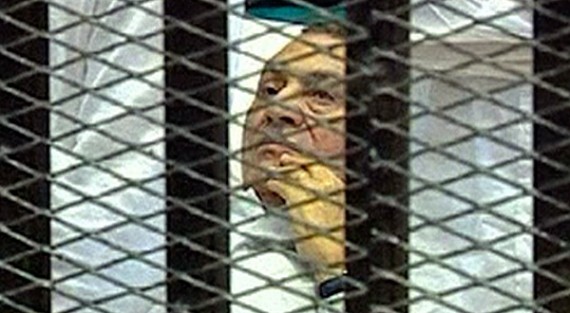 As Steven Taylor already touched on, Egypt and the rest of the Arab world woke up this morning to an extraordinary sight, Hosni Mubarak, who had been President from the day Anwar Sadat was assassinated until February of this year, lying in a cage in an Egyptian courtroom:

In ailing Hosni Mubarak, who served longer than any ruler of modern Egypt until he was overthrown in a revolution in February, was rolled into a courtroom in a hospital bed on Wednesday to face formal charges of corruption and complicity in the killing of protesters. The televised trial was a seminal moment for Egypt and an Arab world roiled by revolt.

Even the most ardent in calling for his prosecution doubted until hours before the trial began that Mr. Mubarak, 83, would appear in a cage fashioned of bars and wire mesh, a reflection of the suspicion and unease that reigns in a country whose revolution remains unresolved. As a helicopter ferried him to the courtroom, housed in a police academy that once bore his name, cheers went up from a crowd gathered outside.

“The criminal is coming!” shouted Maged Wahba, a 40-year-old lawyer.

The sheer symbolism of the day, covered live by television and watched by millions, made it one of the most visceral episodes in the Arab world, where uprisings have shaken the rule of authoritarian leaders. In a region whose destiny was so long determined by rulers who deemed their people unfit to rule, one of those rulers was being tried by his public. On this day, the aura of power — uncontested and distant — was made mundane, and Mr. Mubarak, the former president, dressed in white and bearing a look some read as disdain, was humbled.

“Sir, I am present,” Mr. Mubarak replied into a microphone, from his bed.

“You heard the charges that the prosecutor made against you,” the judge said from his podium in the wood-paneled courtroom. “What do you say?”

“I deny all these accusations completely,” he replied, wearily waving his hand. Then he handed the microphone to his son Gamal.

With those words, the reverberations of those epic protests in Tahrir Square were incarnated in one man, Mr. Mubarak, who last appeared in public on Feb. 10, when he uttered a phrase that suggested the heedlessness of absolute authority. “It’s not about me,” he said then, to the disbelief of hundreds of thousands demonstrating in his capital. On this day, television captured him picking his nose. The two lines were the only words he uttered to the judge. Hard of hearing, Mr. Mubarak looked to his son to repeat the judge’s question to him.

In addition to being of great interest in Egypt itself, the trial is being seen across the Arab world as a symbolic test of the future of the Arab Spring:

When ousted Egyptian President Hosni Mubarak appears in a hastily assembled Cairo courtroom on Wednesday – if he appears at all – it will be a moment unlike any the Arab world has seen in its modern history: a leader overthrown by his own people and put on trial in plain view.

Zine el Abidine Ben Ali, the ousted ruler of Tunisia, fled to Saudi Arabia and has been tried and convicted in absentia.

Saddam Hussein, president of Iraq for 24 years, was tried and executed after a foreign invasion led by the United States. Other rulers have been brought down by military coups and summarily killed or sent into exile.

Mubarak’s trial will be unprecedented – a televised catharsis for millions of Egyptians who took to the streets in January and February united primarily in their hatred of the regime he oversaw for 30 years.

At the same time, though, there are many in Egypt who are concerned that Mubarak’s trial will be little more than a show trial by the new military regime to make it appear that they are breaking with the past, and to distract the public from the fact that the protests that started in February haven’t necessarily come to an end:

Youth groups that led the uprising have continued protests against the military, saying they are fumbling the transition to civilian rule and have not moved to dismantle remnants of Mr. Mubarak’s regime still in place. The military itself has been tainted by reports of human rights violations, including torture.

The generals have tried to turn the public against activists, accusing them of receiving foreign funds and training. On Monday, tensions were hiked when troops broke up a 3-week-old sit-in in Tahrir Square by hard-core protesters.

Prosecuting Mr. Mubarak is widely popular among a public angered by widespread corruption, police abuses and his lock on political power. Regime opponents, whether Islamists or pro-democracy activists, are eager for retribution after years of crackdowns and torture against them.

The question is whether it will mean a real uprooting of the system he headed.

“The trial can signal a break with the past but only if people can see that the proceedings are clean and transparent. But what happened in Mubarak’s 29 years will not be erased in a day or two or a week,” said Shady Dawoud, a 24-year-old university graduate who is among the ranks of Egypt’s unemployed. “It does not amount to the end of his regime, that will take 10 years or so.”

At the end of the day, there remains a conflict in Egypt between the protesters who want to wipe away the last vestiges of the Mubarak regime, and the military, whose primary concern is most likely stability. The Mubarak trial can either be the beginning of the dismantling of the regime or it can be a Potemkin Village. Which one it turns out to be is likely to determine the future of Egypt and much of the rest of the Arab world.