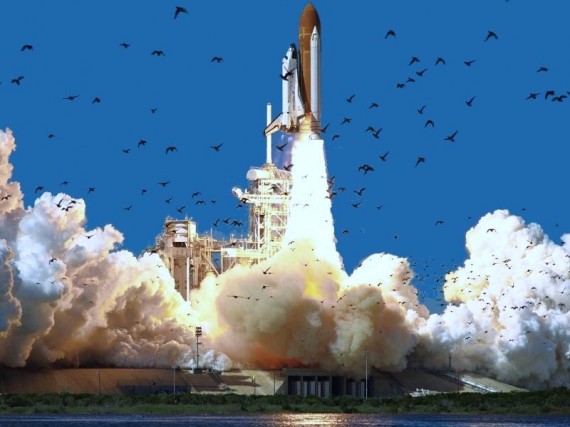 NASA Officials, along with the surviving relatives of many of the seven astronauts who died when the Space Shuttle Challenger exploded shortly after launch on January 28, 1986, are upset about a new single from Beyonce that samples audio from Mission Control in the moments after the disaster:

Beyoncé has been labeled “insensitive” by some current and former NASA astronauts and their families for sampling audio from the space shuttle Challenger disaster for a love song off her newly released album.

Challenger exploded 73 seconds after liftoff from the Kennedy Space Center Jan. 28, 1986. All seven crewmembers aboard were killed.

Twenty-seven years later, Nesbitt’s voice is heard at the beginning of the video for Beyoncé’s new song “XO,” about a troubled relationship. The singer has said that “XO” was written and produced by Ryan Tedder and Terius Nash, who goes by the stage name The Dream.

Beyonce, in an exclusive statement to ABC News this morning, said, “My heart goes out to the families of those lost in the Challenger disaster. The song ‘XO’ was recorded with the sincerest intention to help heal those who have lost loved ones and to remind us that unexpected things happen, so love and appreciate every minute that you have with those who mean the most to you.

“The songwriters included the audio in tribute to the unselfish work of the Challenger crew with hope that they will never be forgotten.”

But former and current NASA astronauts, employees and Challenger family members argue that using it in a pop song mocks the crew’s sacrifice and opens fresh wounds.

June Scobee Rodgers, the widow of Challenger Space Shuttle Commander Dick Scobee and a founder of the Challenger Center for Space Science Education, told ABC News she is “disappointed” in the singer’s decision to include the clip.

“We were disappointed to learn that an audio clip from the day we lost our heroic Challenger crew was used in the song ‘XO,'” she said. “The moment included in this song is an emotionally difficult one for the Challenger families, colleagues and friends. We have always chosen to focus not on how our loved ones were lost, but rather on how they lived and how their legacy lives on today.”

Keith Cowing, a former NASA employee who now runs the NASAWatch.com website, said, “This choice of historic and solemn audio is inappropriate in the extreme. The choice is little different than taking Walter Cronkite’s words to viewers announcing the death of President Kennedy or 911 calls from the World Trade Center attack and using them for shock value in a pop tune.”

Cowing wants Beyoncé to remove the clip and apologize to families of the Challenger crew.

So, is this appropriate or not? What is it were the Cronkite audio that Cowing mentions, or the 911 calls or calls to family members from the people on the upper floors of the World Trade Center’s North and South Towers who knew they were going to die, or the 911 calls in the moments after the shooting in Newtown? Where does the line between good and bad taste lie here?

I’m not sure I know the answer, but even after nearly 28 years, those moments after the Challenger exploded remain raw for those of us who watched the event live on television. Using them to enhance a song seems wrong somehow.