Navy SEAL Comes Out as Transgender

Chris Beck spent 20 years as a Navy SEAL. Kristen Beck has written a book about her experiences. 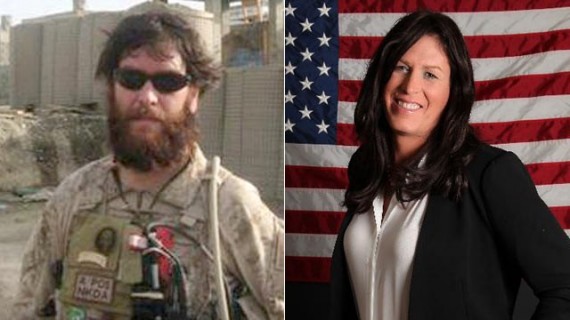 Yet another Navy SEAL has written a book. This one didn’t kill bin Laden.

In every Navy SEAL is a memoir, it seems lately. Retired SEAL Kristin Beck’s new memoir,published on Tuesday and titled Warrior Princess, is a bit different, though. In it, Beck describes how, over the course of her 20 year military career, including thirteen deployments over the globe, she slowly became more and more aware that was she meant to live life as a woman — a vexing and often tormenting realization for a long-time member of an elite all-male unit that went on to capture and kill Osama bin Laden. Beck, who identified as a man (and went by the name Chris) while in the Navy, explains that she decided to undergo hormonal therapy some time after retiring in early 2011, and eventually came out to colleagues by posting a picture of herself dressed as a woman on LinkedIn earlier this year

Soon, the responses from SEALs stationed all around the world suddenly started pouring in: “Brother, I am with you … being a SEAL is hard, this looks harder. Peace” * “I can’t say I understand the decision but I respect the courage. Peace and happiness be upon you…Jim” * ” … I just wanted to drop you a note and tell you that Kris has all the support and respect from me that Chris had … and quite possibly more. While I’m definitely surprised, I’m also in amazement at the strength you possess and the courage necessary to combat the strangers and ‘friends’ that I’m guessing have reared their ugly heads prior to and since your announcement. …”

Thirteen deployments, seven to combat zones, and a Purple Heart have earned Beck a permanent membership in a warrior brotherhood. Her story would likely have had a quite different reception, though, even a decade ago.