Canada's Liberal Party ran on a platform that includes nationwide marijuana legalization. With the election won, it seems only a matter of time before Canadians will be able to light up legally. 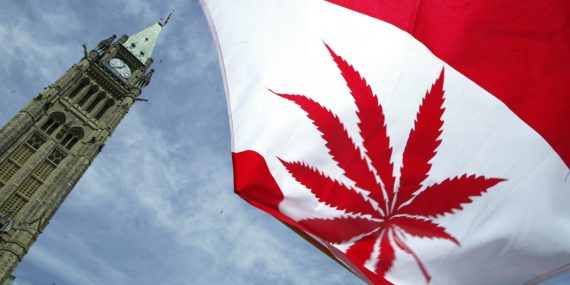 Last night’s Liberal Party victory in Canada likely means that legal marijuana will be coming to America’s neighbor to the north. As Jacob Sullum points out at Reason, the party ran on a promise to legalize marijuana, and included a plank on the issue in their platform:

We will legalize, regulate, and restrict access to marijuana.

Canada’s current system of marijuana prohibition does not work. It does not prevent young people from using marijuana and too many Canadians end up with criminal records for possessing small amounts of the drug.

Arresting and prosecuting these offenses is expensive for our criminal justice system. It traps too many Canadians in the criminal justice system for minor, non-violent offenses. At the same time, the proceeds from the illegal drug trade support organized crime and greater threats to public safety, like human trafficking and hard drugs.

We will remove marijuana consumption and incidental possession from the Criminal Code, and create new, stronger laws to punish more severely those who provide it to minors, those who operate a motor vehicle while under its influence, and those who sell it outside of the new regulatory framework.

We will create a federal/provincial/territorial task force, and with input from experts in public health, substance abuse, and law enforcement, will design a new system of strict marijuana sales and distribution, with appropriate federal and provincial excise taxes applied.

In comments earlier in the campaign, incoming Canadian Prime Minister Justin Trudeau said that the creation of a legalization regime would be a top priority for the new government:

During a campaign stop in B.C.’s Lower Mainland, Justin Trudeau said a Liberal government would start work “right away” on reforming the country’s marijuana laws.

At an event in Surrey Wednesday, CTV News reporter Laurie Graham pointed out to Trudeau that while one of his earliest promises after becoming Liberal leader was to legalize marijuana, he has not expanded on that pledge during the campaign.

“When can Canadians expect you to legalize pot if you’re elected?” she asked the Liberal leader.

Trudeau responded that Liberals were committed to ending Harper’s “failed approach on marijuana” that he said makes it easier for young people to get their hands on the drug than beer or cigarettes.

“We’re going to get started on that right away,” he said, adding that his team would research best practices from other jurisdictions around the world that have legalized marijuana.

Graham noted that the Liberal fiscal plan for the next four years does not include taxes on pot as a source of revenue. Trudeau reiterated that the party would start working on legalization and regulation of marijuana “right away.”

The leader gave a loose timeline, saying laws could be changed within the first two years of a new Liberal government.

He defended the omission of marijuana revenues from the party’s platform because they don’t yet know the rate at which the drug would be taxed or whether that would happen within the first months, first year, or second year of government.

“But make no mistake about it, Mr. Harper’s failed approach — which endangers our kids and endangers our communities —needs to stop,” he repeated.

The Liberals aren’t alone in their support for legalization in Canadian politics since it is a position shared by the New Democratic Party, which will control the third largest number of seats in the new Parliament after the Conservatives, as well as other minor party. Meanwhile, Bloc Québécois, the political party that has promoted ideas such as greater autonomy for Quebec in the past, officially supports decriminalization of marijuana. That leaves only the Conservatives, which have just suffered a significant defeat that is likely to leave them reeling for a direction for the better part of the next year or more, as the only Canadian political party that supports the current policy regarding marijuana, which isn’t all that dissimilar from those of the Federal Government here in the United States and most state government with the exception of those jurisdictions, such as Colorado, Washington, Oregon, Alaska, and the District of Columbia that have acted to legalize marijuana and the local and state jurisdictions that have decriminalized it to the extent that possession of the amount of marijuana an average person would use is essentially treated like a traffic infraction than a criminal offense. More recently, there have been movements to put marijuana legalization initiatives on the ballot, including in California where a similar measure failed in 2012 but seems likely to succeed this time around assuming supporters can get sufficient signatures to get it on the ballot.

From Trudeau’s words, it doesn’t sound as though legalization will be among the first actions the new government takes when Parliament reconvenes, and that’s somewhat understandable. While this is an important issue to many, it is but one of many that the Liberals campaigned on and not necessarily the highest priority. Additionally, his comments suggest that they haven’t entirely thought through what regulations would be appropriate regarding legal marijuana, how to deal with the issue of minors having access to the drug, or the myriad of complex issues revolving around international drug trafficking, many of which are covered by treaties to which Canada (and the United States) is a signatory. There are also issues that will be raised by the fact that Americans may be looking to come across the border to take advantage of the new law when it does pass, something that may or may not sit well in the United States depending on what the legal status of marijuana here is at that point. Obviously, it won’t be much of an issue in the Pacific Northwest or along the Canadian border with Alaska, but that only covers one part of the vast border between the two countries.

All those questions aside, though, this is yet another example of the extent to which the movement to legalize marijuana has advanced around the world in a relatively short period of time. There was a time in the past where legal marijuana was the exception rather than the rule, found only in some European nations such as The Netherlands. As time has gone on, though, public attitudes on the issue have shifted significantly such that, in addition to the legalization and decriminalization efforts we’ve seen here in the United States, polling now shows that a majority of Americans support the full legalization of marijuana. With referendum efforts continuing in other states, and California possibly set to join the list of states where marijuana is legal within a year or two, the fact that our largest and closest neighbor only seems likely to spur action along that route here in the United States, and that’s a good thing.