Cory Booker has not been quite as dominant in the New Jersey Special Election as many expected, but he's still a virtual lock to win on Wednesday. 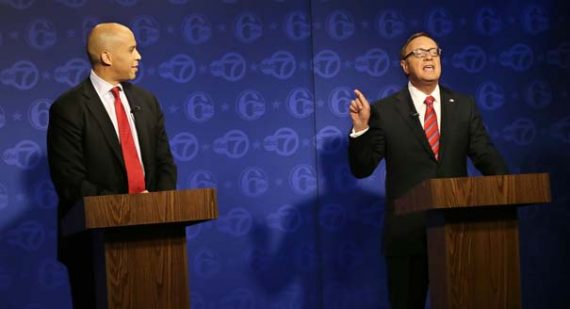 The race to replace Frank Lautenberg has gotten tighter than many political observers thought it would get:

Newark Mayor Cory Booker still holds a double-digit lead over his Republican challenger in the New Jersey Senate race, a new poll shows, but his lead continues to shrink with the election two days away.

Booker leads Steve Lonegan by 10 points, 52 percent to 42 percent, among likely voters in a poll out Monday from Monmouth University.

A separate poll last week had Booker up by 12, two weeks ago Monmouth had him up by 13 and over the summer by 16. In August, polls had Booker’s lead topping 24 percent.

The poll also found Booker’s favorability has dropped since this summer. While voters still view him favorably, 51 percent to 30 percent, that’s down from 61 percent to 15 percent in June.

Voters view Lonegan favorably 38 percent to 35 percent, also narrower than June, when he registered a 34 percent to 20 percent favorability margin.

Booker’s national profile may be a disadvantage in the race, according to the poll. Forty-eight percent said Booker is running for Senate more to be on the national stage, while 37 percent said he was running to serve New Jersey. Seven percent said he’s doing both.

As noted, this is something of a tightening from June when this race began in earnest. Back then, Booker’s lead looked so insurmountable that several Republicans who have a far more prominent statewide role than Lonegan does decided to sit the race out despite the fact that in most cases, like State Senator Tom Kean, Jr., it would not have required them to choose between running for re-election and running for the Senate. When Lonegan won the GOP primary, essentially by default, polling showed him far behind Booker and his roots in the Tea Party Movement make it seem unlikely that he’d have any real impact on the race. Despite all of this, though, the polls have indeed shrunk. Rather than the 20-25 point leads that Booker had in June and July, he now has a lead that varies from 10-12 percent. Still very good, obviously, but not exactly what many observers and more than a few national Democrats were hoping for.

This chart shows what happened: 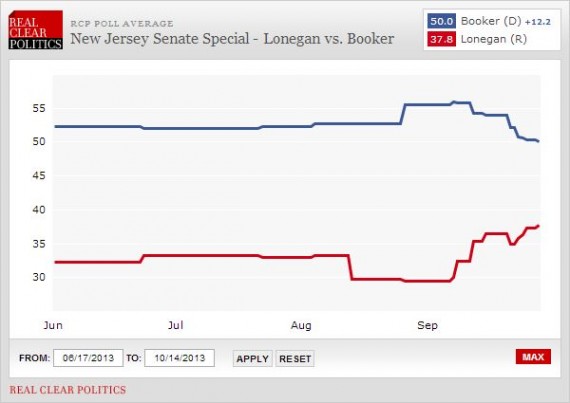 Looking at things graphically, it’s pretty clear that Booker has little to actually worry about, but it also shows that there has been some slippage in numbers that two months ago seemed to be headed to Christie-like levels. Part of what happened here, of course, is what happens in every election. Much of Booker’s lead in the polls could easily be explained by his celebrity status and the fact that he has been a national/statewide figure for years in a manner in which no other Mayor of a New Jersey city has been in my recollection. It was inevitable that some of that support would slip away. The other factor is, as even some Democrats have admitted, Booker has not run an entirely smooth campaign. Travelling to California, or into New York City, several times during the course of the campaign for fundraisers has left him open to criticism from Lonegan that makes it appear as though he’s already looking past the Senate to a future national political career, something that is reflected in the poll numbers quoted above.

This being New Jersey, though, it seems highly unlikely that there’s any realistic shot of a surprise here. This is a state that went for President Obama by 16 points in 2008 and 18 points in 2012. Senator Bob Menendez beat his Republican opponent by nearly 20 points last year in the state. The prospect of a conservative like Lonegan pulling off a victory in such an environment is simply not believable. Furthermore, the fact that this Special Election is on Wednesday rather than Tuesday, and not coordinated with the November General Election means that turnout will be key, and the New Jersey Democratic Party is very good at the GOTV game, especially in voter right areas in Northern and Central New Jersey. So, yes, this election will be closer than a lot of people expected, but Booker is still going to win by a very comfortable margin. Where he goes from there will be up to him.

On a final note, the interesting part of this race that this is really somewhat of a dress rehearsal. Because Senator Lautenberg’s term in office was scheduled to be up for re-election in 2014, Booker will have to do this all over again in November of next year. Whether he has any serious challengers in that race, which I tend to doubt, may well depend on the size off his victory this week. Anything below 10% may cause some Republicans, and Democrats, that he could be vulnerable to a challenger. For that reason alone, Booker is likely hoping that he disposes of Lonegan quite handily.