New reports indicate that New Orleans Police were given orders to shoot looters amid the chaos after Hurricane Katrina hit the city. Fortunately, that never happened. 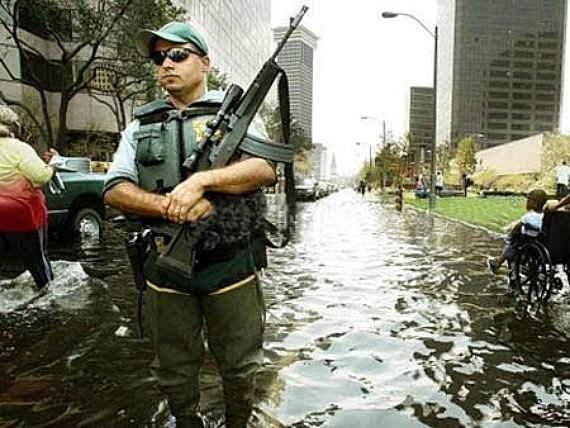 Five years after Hurricane Katrina, the New Orleans Times-Picyaune has an incredibly disturbing report alleging that police officers were told to shoot looters in the wake of the storm:

In the chaotic days after Hurricane Katrina, an order circulated among New Orleans police authorizing officers to shoot looters, according to present and former members of the New Orleans Police Department.

It’s not clear how broadly the order was communicated. Some officers who heard it say they refused to carry it out. Others say they understood it as a fundamental change in the standards on deadly force, which allow police to fire only to protect themselves or others from what appears to be an imminent physical threat.

The accounts of orders to “shoot looters,” “take back the city” or “do what you have to do” are fragmentary. It remains unclear who originated them or whether they were heard by any of the officers involved in shooting 11 civilians in the days after Katrina. Thus far, no officers implicated in shootings have used the order as an explanation for their actions. Only one of the people shot by police — Henry Glover — was allegedly stealing goods at the time he was shot.

Still, current and former officers said the police orders — taken together with tough talk from top public officials broadcast over the airwaves — contributed to an atmosphere of confusion about how much force could be used to combat looting.

In one instance captured on a grainy videotape shot by a member of the force, a police captain relayed the instructions at morning roll call to cops preparing for the day’s patrols.

“We have authority by martial law to shoot looters,” Capt. James Scott told a few dozen officers in a portion of the tape viewed by reporters. Scott, then the commander of the 1st District, is now captain of the special operations division.

Another police captain, Harry Mendoza, told federal prosecutors last month that he was ordered by Warren Riley, then the department’s second-in-command, to “take the city back and shoot looters.” A lieutenant who worked for Mendoza, Mike Cahn III, said he remembered the scene similarly and would testify about it under oath if asked.

As the paper said in an editorial also published today, this revelation is disturbing on a whole variety of levels:

It’s hard to fathom that revelations about New Orleans police abuses around the time of Katrina could grow more disturbing. After all, 18 current and former officers have been accused of killing innocent civilians or of covering up the crimes — with more charges expected.

But the allegations that some high-ranking officials in the department gave orders to “shoot all looters” are alarming — and it’s good that federal investigators appear to be examining those claims.

Several current and former police officers said the order to shoot looters circulated widely in the department during the chaotic days after the storm. Some officers said they refused to follow it or to pass it along. But others said they understood it as a fundamental shift in policy, which normally allows officers to use deadly force only to protect themselves or others from what appears to be an imminent physical threat.

That’s how it should have remained. Coupled with the breakdown in the department’s command, any order that suggested a relaxing of the rules could have contributed to the rogue behavior by some officers.

The Police Department faced daunting challenges during the storm, and many of its members performed heroically. An officer, Kevin Thomas, was shot in the head.

But those chaotic conditions would not justify anyone in the department deciding that officers could shoot people just for stealing.

Indeed not, and the fact that such orders were apparently circulated even on a minimal basis is a reflection of just how unprepared the City of New Orleans was for the scale of the disaster that struck at the end of August 2005, and just how little control the New Orleans Police Department, which was already weakened by the fact that many of its own officers left the city ahead of the storm rather than standing their posts. This report also provides further evidence of just how far into anarchy the city had descended during those days in August and September. When the police start viewing the public as their enemy rather than the people they serve, then any hope for order is essentially lost.

One hopes that we can look at what happened in New Orleans and learn from it, rather than just repeating the same mistakes all over again the next time disaster hits.