News Tickers: Everything Changed After 9/11 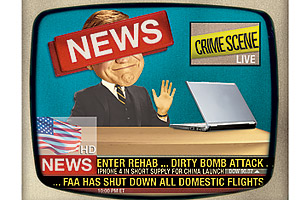 While everything didn’t change after 9/11, one of the things that did was the presentation of television news.  James Poniewozik for TIME:

The morning of Sept. 11, 2001, there was more news than the country could bear and more than a TV screen could fit. Beyond the plane crashes and burning buildings, reports and rumors abounded of other attacks, explosions, evacuations. There was chaos, fear and both literal and figurative smoke clouding the situation. There was too much to process and too much to transmit; the news was on overload.

Enter the ticker: the steady stream of headlines that glided along the bottom of the screen while anchors did interviews, while leaders addressed the public, while the towers fell. Fox News, which in so many ways set the tone, volume and attitude of cable news in the ’00s, was first to deploy the ticker that morning, followed by CNN and MSNBC. It was an improvisational call — a simple, old-fashioned solution (harkening back to the “zipper” installed on the New York Times building in 1928) to a modern problem.

After the shock wore off and the smoke cleared, the ticker remained. It became not just a tool but a symbol. It was a message in itself, a constant prod, an emblem of a media era of constant crisis mode and steady overstimulation. At first, the ticker was like a relief valve, a way for millions of anxious viewers to tune in and quickly get updated: white house evacuated … faa has shut down all domestic flights … red cross appeal — blood donations … 2 aircraft carriers have been deployed … Then it became a kind of anxious Greek chorus of constant low-level chatter: anthrax scare … shoe bomb …

The emergency receded, but the signifier of emergency never did. Crawls were used on TV before 9/11 — but temporarily, for major breaking news, weather emergencies, elections, national crises. They asked for heightened alertness, gave your pulse reason to quicken just a little. And now, the data stream onscreen seemed to say, the emergency was permanent; the warning lights were always flashing.

Indeed, even on sports programming, where no such urgency exists, the ticker is now ever-present.  It’s been with us so long that I’d buried the origin.  But I still find it annoying and distracting, beckoning me to read to see what’s new rather than concentrate on what’s on the big screen.