Tim Lee, guesting at Megan McArdle’s place, dismisses the romanticism of such things as Howie Kurtz’ lament about the dying of the newspaper industry.

The “wholesale abandonment of newspapers” is simply a reflection of the fact that the web now provides a wealth of new technologies for delivering news and information. Websites are more comprehensive, more customizable, more timely, and, yes, more engaging, than newsprint. Video—whether delivered via cable or YouTube—isn’t inherently less serious or substantive than newsprint. And of course there are a ton of textual news sources to choose from that aren’t “newspapers” per se.

Kurtz’s dichotomy, between “newspapers” on the one hand, and “Xbox and Wii and full-length movies on their iPods” on the other, simply fails to grasp this diversity. There is nothing magical about paper and ink, and there’s absolutely no reason to lose sleep over the fact that people in the year 2050 are unlikely to learn about the previous day’s happenings by retrieving a bundle of newsprint from their front steps. Journalists are an indispensable part of a free society. Newspapers are simply a technology that many journalists happen to have used to convey their ideas during the 20th century. That medium is now being replaced by a more versatile medium called the Internet, and that’s not a bad thing from almost any perspective.

That’s right, of course, so far as it goes. But newspapers are more than just a means of distributing news, they’re a business model for sustaining journalism. The Internet, by contrast, is merely a means of distributing news and commentary. Nobody should be concerned if Thomas Ricks stops producing context that appears in newsprint. But how does an aspiring Thomas Ricks make a living if there’s no newspaper to hire him? Everyone can’t go work for Josh Marshall, after all.

To be sure, there’s no reason the Washington Post shouldn’t continue to exist as a journalism producing institution even if it ceases to put out a paper edition. The Politico is doing quite nicely as a Web-first publication that puts out a paper as an afterthought. But the fact that the Post and others continue to shrink their writing staffs would seem to be an indicator that the Web editions aren’t going to fill the gap entirely.

UPDATE: In a follow-up post, Lee addresses this concern:

Bureaucratic organizations tend to have high overhead and to allocate resources poorly. In hierarchical news organizations, reporters tend to be confined to narrowly defined beats and are given limited flexibility to branch out into other subjects that might interest them more. Large organizations tend to waste resources—flying a reporter to a remote location and putting her up in a hotel when a locally-based freelancer could have covered the story just as well, for example.

Maybe so. Maybe we’ll see an Army of David Suskinds out there with their mini-cams recording and reporting on the news in a way that’ll be an improvement over the old model. Then again, maybe we won’t. 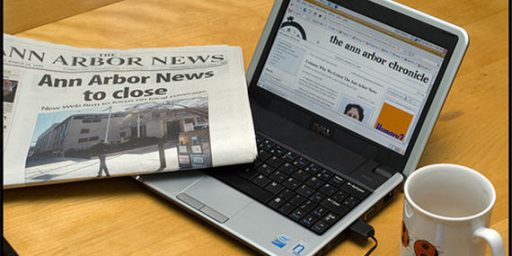 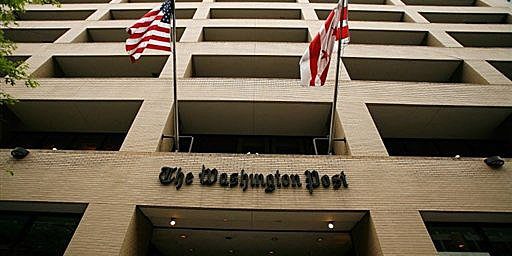