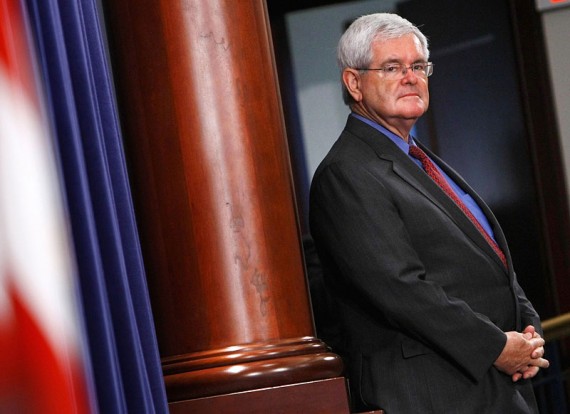 In yet another example of how Newt Gingrich’s past is inevitably going to catch up with him, David Corn links to this 2007 column by Newt Gingrich, at his Gingrich’s own website no less, where he endorses the idea of an individual mandate for health insurance:

In order to make coverage more accessible, Congress must do more, including passing legislation to: establish a national health insurance marketplace by giving individuals the freedom to shop for insurance plans across state lines; provide low-income families with $1,000 in direct contributions to a health savings account, along with a $2,000 advanced tax credit to purchase an HSA-eligible high-deductible health plan; make premiums for these plans tax deductible; provide tax rebates to small businesses that contribute to their employees’ HSAs; extend and expand grant funding to high-risk pools across the country; and require anyone who earns more than $50,000 a year to purchase health insurance or post a bond.

Now, here’s Gingrich in May of 2011 after he announced his campaign for the Presidency:

Gingrich might try to finesse himself here by pointing to the income requirement, but all that really means is that he favors requiring everyone who’s at least middle class to buy health insurance or post a bond. How, exactly, is that substantively different from the mandate in the PPACA? And if you’re a conservative who opposes the mandate on principle, how do you reconcile supporting Newt Gingrich as the not-Romney?