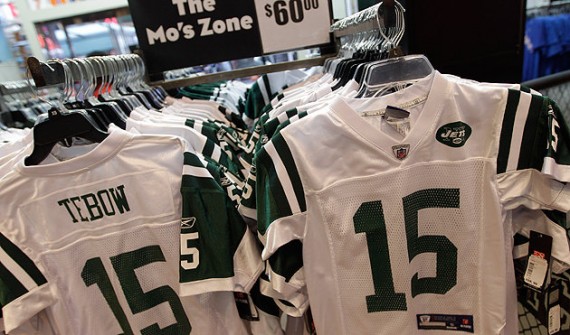 Nike Inc. claimed in a lawsuit in U.S. District Court that Reebok International Ltd. has used Tebow’s name on Jets-related apparel without permission since it was announced last week that Tebow was traded from the Denver Broncos to New York. The Tebow trade occurred just before Nike replaces Reebok on Sunday as the supplier of NFL team uniforms.

The lawsuit, which seeks unspecified damages, claims that Reebok misappropriated publicity rights, interfered with business relationships and unjustly enriched itself because it failed to get Tebow’s permission before launching the new products.

It said Nike, based in Beaverton, Ore., believes Reebok was shipping large volumes of Tebow-related apparel products to retailers for sale to the public this week, damaging Nike’s ability to capitalize on a “unique and short-lived opportunity.”

The lawsuit added that it was unlikely that a consumer who buys an unauthorized Tebow jersey or T-shirt from Reebok this week will purchase an authorized Tebow item from Nike next week.

I’m not sure why that’s Reebok’s problem. They have exclusive rights to sell NFL merchandise until midnight Saturday. The opportunity to sell a boatload of Jets merchandise with Teebow’s name on them arose before that deadline. That’s a damn shame for Nike but them’s the breaks; presumably, there will be other opportunities to capitalize on other crazes when it’s Nike’s turn.

FILED UNDER: Law and the Courts, Quick Takes, Sports