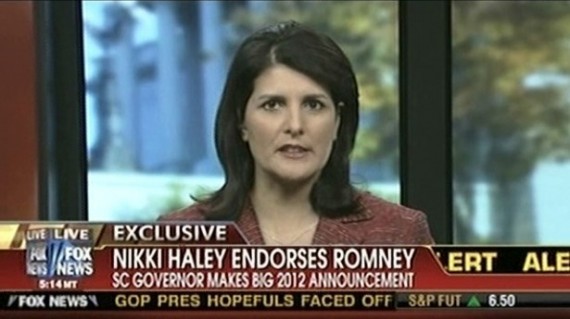 South Carolina Gov. Nikki Haley, one of the most sought-after remaining Republican endorsements, will come out for Mitt Romney Friday morning, POLITICO has learned.

Haley will offer her formal endorsement on Fox and Friends, giving Romney an important boost ahead of South Carolina’s primary next month.

Romney is heading to South Carolina this weekend, where he’s likely to be joined by Haley at town hall meetings on the coast.

Haley, a tea party favorite who upended South Carolina’s GOP establishment by winning last year, has been courted by all of the GOP presidential contenders. As a state representative, she backed Romney in 2008.

The last line is an important reminder of something I’ve noted in this space several time: Mitt Romney was the choice of much of the conservative Establishment last go-round, at least once Rudy Giuliani and Fred Thompson imploded. Mike Huckabee was, despite his social conservative bonafides, thought to be too wacky on other issues. And Romney was widely favored over John McCain, the eventual nominee, as being more reliably conservative.

Nikki Haley, the South Carolina governor elected with the help of the Tea Party movement and whose support is coveted, endorsed Mitt Romney Friday morning, making her announcement on “Fox & Friends.”

“Today is the day that I’m throwing all of my support behind Mitt Romney for president,” Ms. Haley said, speaking from South Carolina. “What I wanted was someone who knew what it was like to turn broken companies around.”

Ms. Haley is expected to appear with Mr. Romney at a rally at a firehouse in Greenville, S.C., Friday afternoon, and the two are also scheduled to appear on Greta Van Susteren’s “On the Record” Friday evening. South Carolina follows Iowa and New Hampshire in presidential nominating contests.

“Now more than ever, we need someone who has the leadership to deal with a broken Washington,” Ms. Haley added.

Mr. Romney’s campaign is hoping that Ms. Haley’s nod, like the endorsement by Chris Christie, the governor of New Jersey, will send a broader message of acceptance by conservative Republicans, whose support he has struggled to win.

“It is an honor to have the endorsement of Governor Haley,” Mr. Romney said in an e-mail statement released by his campaign. “As a successful businesswoman who entered public service so government could better serve the people, Governor Haley’s career-long efforts to reform government, make government more accountable to the taxpayers, and fight wasteful spending should be examples for leaders across the country. These conservative principles of smaller government are what I am fighting for in my campaign and will be the basis for restoring economic prosperity and fiscal health.”

The endorsement from Ms. Haley has the potential to help Mr. Romney in a critical, conservative state where he is trailing Newt Gingrich in most polls. Mr. Romney came in fourth in the state in 2008, getting only 15 percent of the vote.

Even with Ms. Haley’s nod, Mr. Romney may have a tough time in the state, where Republican primary voters tend to be conservative and religious. Mr. Romney, who is a Mormon, could still struggle for support in the state.

But the benefit to Mr. Romney from Ms. Haley’s endorsement may go beyond the borders of South Carolina.

By edging out Mr. Gingrich for the nod, Mr. Romney may be able to shift the narrative of a campaign that is playing catch-up in the last weeks before voting begins. That could help him regain ground he has lost in the polls in places like Iowa and New Hampshire.

It also gives Mr. Romney another stamp of approval from an outside-Washington, Tea Party conservative who can testify — and will, all weekend long — that Mr. Romney’s conservative credentials are better than Mr. Gingrich’s.

Barring some late surge by Jon Huntsman or Rick Santorum–both of which strike me as wildly unlikely–we’re down to a two man race between Romney and Newt Gingrich. And hardly any elected Republican seems to cherish the notion of Gingrich as the party’s nominee.